Revealed today at their official YouTube channel, the Official Yu-Gi-Oh! channel released a new trailer to the upcoming English Dub movie “Yu-Gi-Oh!: The Dark Side of Dimensions”. In this new trailer, the video reveals a new updated release date. The movie will be released in the US and Canada on January 27, 2017. The movie was previously on Jan. 2o but now it’s Jan. 27.

Manga Entertainment and 4k Media will screen the movie at the UK and Ireland on February 1, 2017.

Thank you Raistlin0903 for nominating me for this Sunshine Blogger Award! After this post, go check out his blog and if you like Sword Art Online, this is the guy who is willing to chat about SAO. SAO is my favorite anime is as well.

1. How long have you been blogging, and what made you get started in the first place?

I have been blogging for about a year and half I believe. I started at 2014 but I stopped until late December and all the way to 2015. I first got into blogging because I took a class in regards to the public sphere. I professor made us get these accounts in order to get graded and discuss the importance of being informed. After the class, I decided to convert this blog as a blog of my hobbies such as anime, video games, movies, comics and personal stuff.

2. Say that you could interview someone on your blog, who would it be, and why him/her?

This will be lengthy but bear with me.

Kauses is another aniblogger I know who writes articles about video games and anime. He hosts a site called Otaku Gamer Zone and he also writes articles to Viewster, a site where people can legally stream anime. He also does livestreams in YouTube and Twitch. He likes to play Fallout 4, Overwatch and Valkyrie. He’s a pretty awesome guy and I first met him when I saw an article about Kill la Kill.

It would be awesome to talk to another gamer who likes anime and get to know him. We also have a PS4 and it would be nice to chat and play games at the same time. He’s actually the first guy to hear my voice! Not to mention, if you ever hear his livestreams, he’s pretty funny by imitating accents. Talking to him would making game more enjoyable.

Another great friend in the anime community, Shay is another anime fan that enjoys talking about anime and discussion on specific topics in regards to interest and opinions. Not only she likes anime, but she also likes comic books and video games. She also has her own YouTube channel and hosts a podcast along with Lita called the Senshi Ani Girls.

I would like to interview her one of these days. I think it would be awesome to talk to some one who also questions and opinions towards anime and society. I also find her amazing since she’s not afraid to speak her mind and admit that she is girl but she also likes anime. An interview with her would be awesome. 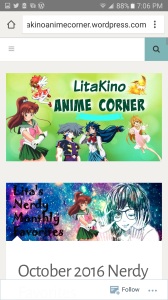 Last but not least, I would like to interview LitaKino. Lita is no stranger in the anime community. Lita is another anime girl who loves the anime community and enjoys talking about her passion. Just like Shay, she also hosts the Senshi Ani Girls podcast and has her own channel. Besides talking to Shay, she also, in the past, does livestreams with other anime reviewers and bloggers like Deven and Blade Ninja. No matter what time it is or her schedule, LIta will make time for us.

If it was possible, I would like to interview Lita and get to know more about her. I would ask her where does she keep her strength to blog and chat online. Lita is wonderful anime fan friend and I think it would be nice to talk to her.

3. What is your favorite Anime/Movie/Tv show of all time?

This is a tough question because I have a lot of favorites in anime. Currently, I think my favorite anime is Sword Art Online and Dragon Ball Z.

My favorite movie would be the Avengers and Final Fantasy VII: Advent Children.

My favorite TV shows is a cartoons and one sitcom. I like Ed, Edd’n Eddy and Full House.

4. Do you own any merchandise? If so, what is the thing that you like the most in your collection?

I do have some merchandise. I have a Sword Art Online fabric poster, Final Fantasy VII: Advent Children poster, and some keychains like SAO, Sandslash Pokemon, Keyblades Kingdom Hearts, and a Captain America shield, and a Bleach Umbrella. My Favorite is the Pokemon keychain with Sandslash and the Bleach Umbrella.

5. Is there anything you would like to do someday, but just have not yet been able to accomplish ?

It would be nice to get the confidence and courage to be able to speak and participate in the anime community through YouTube. I noticed my online friends are able to just record themselves or livestream and respond fluently to the public. I am just guy who hides behind a screen and too scared to face the crowd. Still, I always imagine myself speaking out what’s on my mind.

6. What is the post you are most proud of, and why is that?

I have two special post in which I am proud to write about. The first one is a reflection post called “Graduation – My School Life and the Future story time”. In this one, I talk about my experience when I was in college and where do I go from here. This post was written after graduation. The second is titled “TGIF Friday Funny Origins story time”. In this post, I talk how did I start my TGIF posts and what was the beginning like.

7. Has there ever been a post on your blog that you have regretted writing? If so, why is that?

There was one I regret doing since no one seemed to care about it. Don’t bother looking for it because I deleted it. I wrote a random post about SpongeBob and I how noticed that some of the recent episodes have him actually driving. If you are familiar cartoon, SpongeBob always fails his driving test but in the recent episodes, he is seen driving. I did a funny rant post discussing and showing evidence that the creators have forgotten how to make a SpongeBob episode.

I got interested becuase I like how the characters are something to relate and I felt like they could be anyone. In anime, unlike cartoons, the characters partially represents us and they show us what is it like to go through life. Also, they have story in which if you like the show, the story moves on and the characters grow and mature. In a nutshell, anime/movies feels more real even though it’s all fiction or exaggerated.

9. Do you have any goals that you would like to ultimately achieve with your blog?

I actually have a goal in mind. It would be nice to turn my blog into a website similar to Anime News Network and Crunchyroll news. I enjoy keeping my readers up to date on the news and I like to share my reviews. With my writing skills, I wish to use my blog and make it into a career in which I can write the news but also write about something I am interested in.

10. What if you could star in your own Anime/Movie? What kind of Anime/Movie would it be, and who would you play?

11. What was the worst Anime/Movie that you have ever seen? 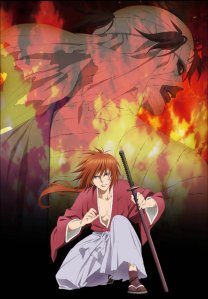