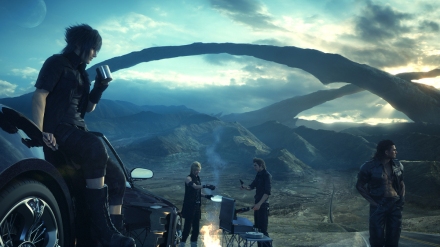 After a decade of waiting, the long awaited Final Fantasy game Final Fantasy XV (previously called Final Fantasy Versus XIII) is finally released. With many promotional videos, anime, movie and apps and delays, Final Fantasy XV brings the fun and enjoyment for those who have waited for a long time. In this review, I will be discussing the gameplay, story and value and let you know if this game is worth buying. I won’t be spoiling the story here so don’t worry. Final Fantasy XV is owned by Square Enix and the game is available for PS4 and Xbox One.

Enroute to wed his fiancée Luna on a road trip with his best friends, Prince Noctis is advised by news reports that his homeland has been invaded and taken over under the false pretense of a peace treaty – and that he, his loved one and his father King Regis, have been slain at the hands of the enemy.

To gather the strength needed to uncover the truth and reclaim his homeland, Noctis and his loyal companions must overcome a series of challenges in a spectacular open world – that is filled with larger-than-life creatures, amazing wonders, diverse cultures and treacherous foes.

Like any other Final Fantasy game, the main character along with a party of interesting allies are faced against the enemies equipped with their best skill and weapons. Each Final Fantasy game have a different story which makes them unique. For example, Final Fantasy VII was about Cloud and his friends saving the planet from doom; Final Fantasy X is about Tidus fighting a monster named Sin and saving Spira. In Final Fantasy XV, the story is more of rite of passage story. We see the young, soon to be king Noctis Lucis Caelum along with his friends to not only to reclaim what is lost but to save the world. Noctis must bear the burdens of a king and accept losses. If you played or at least familiar with Final Fantasy VII, get ready for an experience.

When I first heard about this game as Final Fantasy Versus XIII, I thought this story was going to play as like a dark version of The Lion King where the Prince Noctis runs away and later comes back to rescue his kingdom. However, this game could be be described as a young boy learning to become a man. After a while playing this game I also noticed that this game focuses on the importance between the characters. Noctis is accompanied by three long time companions, Ignis Scientia, Gladiolus Amicitia and Prompto Argentum. Throughout the story, players will get connected to Noctis and his friends as the story goes through twist and turns. For my experience, I really enjoyed it because it felt I was part of the adventure. The story was amazing and after countless hours of spending time with them characters, they felt real to me. Besides Noct’s friends, the enemies and allies were really interesting. I won’t go into details on who is bad but they aren’t the cliche “hahaha I am evil” villain.

The characters I grew attached was Noctis friends. Each of the four characters have their own unique personality. The protagonist Noctis is young man who likes Sasuke (from Naruto) and can get moody but he’s actually a caring guy. He cares about his friends, his fiancee/friend Lunafreya, and his own father King Regis. Prompto is almost like Naruto, both funny and blonde. Prompto is Noctis school friend and he is known as the comedy relief guy and is armed with guns and machinery weapons. Ignis Noctis’ personal servant and chauffeur who can cook anything and drive for him. He is also skilled with daggers and lances. Gladiolus, or Gladio, is the Crownsguard of Noctis and his father King Regis. It’s his duty to protect them with his life and serve as a bodyguard. Gladio is known for his brute strength and he knows how to use big sword weapons and shields. The interactions with them are great and interesting. Sometimes it could be something funny like a friendly conversation or it could be something series and stir up an argument. Overall, they are likeable and it makes you wish you had friends like them.

One of the things that I dislike was how I just jumped into the story without backbone. To clarify what I mean, there are some points in the game story that felt lacking and it felt like they assumed we know. For example, you don’t really know much about Noctis friends like Ignis, Gladio and Prompto except that they are here to help him and are willing to fight. If you watched the anime Brotherhood: Final Fantasy XV, you would be able to understand the friendship with Noctis and his friends. Another thing that was an issue is after chapter 1. Unless you watched Kingsglaive: Final Fantasy XV, you are going to be either confused or totally spoiled.

The gameplay is open world where you are usually driving around Eos. Just like the real world, you have to pay for gas but at least you can have Ignis drive you places. If you want to save gas, you can walk or rent a Chocobo. Anyway, back to the topic, Final Fantasy XV is a game with a big world and it gives players the opportunity to explore everything. You can even camp out in the wild or stay in hotels or RVs.

The combat system is unlike the previous Final Fantasy games where the player and the computer fight in turn-based combat. The game plays like Kingdom Hearts where players can freely move and plot on how to approach the enemy. You fight as Noctis and you can either either your enemy or throw magic grenades which can either be fire, thunder, or blizzard (yes, it also hurts your friends if they get caught). With Noctis powers, you can teleport in front of the enemy and even teleport away for a breather. The teleport powers become helpful in the stealth missions.

In my intake of the gameplay, I was amazed on the graphics and combat. I played Platinum Demo and even played Kingdom Hearts and I was prepared for the game. One of the things that could annoy players (especially if you are an old fan of FF) would be no turn based elements. Like any other RPG, you can’t just go straight up kill an enemy. Some enemies have a certain weakness or you might have to level up. Throught the first half of the game, the game is huge and you can explore anywhere. However, once you get through the first half, the game becomes linear where you are forced to follow the story. That means, no more exploring and no side missions.

Like any other game, the game does have it’s moments of bugs/glitches and even camera controls. I am not sure if they are fixed but we do get moments in the game where characters act… very abnormal. I don’t mean they act like Assassin’s Creed with “fish-face” or the infamous “no face” glitch. Some characters tend to either float away or even when Ignis is standing while riding a Chocobo. Here some bugs you might encounter.

These are just minor bugs. The big ones are much more annoying and troublesome.One of my problems with these bugs are the camera control. Maybe it’s not a bug but yet it can be annoying especially if you teleport a lot in battle. Whenever you teleport, the game quickly follows with the camera. However, it can be too fast and the camera gets an angle. Sometimes, whenever you use your friends special attack, the camera can’t always position correctly and it ends being blocked by the environment. A bug I encounter usually is when I do hunt missions. In these missions, you have to kill specific animals; the bug is usually that when you go to the area for the mission, the animal is not there. Once it happens, you have abort your hunt and try again. I hope Square Enix can patch it up.

Final Verdict – Is this game worth it?

I am not sure if this post really did help but I will answer this question, was it worth the wait? In my opinion, yes. I say this game deserves an award for the best action-adventure and RPG game. I totally recommend old and new fans to get this game. The characters are unique and amazing and the protagonist is likeable. The combat is an adjustment to the series but if you played action games like Kingdom Hearts, it’s not too hard. The music in the game is the best. This game was long journey in completion and there’s actually more to come. In my opinion, I say whether you have a PS4 or Xbox One, you should pick it up. The English cast is remarkable. Ray Chase as Noctis is one of my top favorite English actors. Anyway, I love this game and I haven’t enjoyed game like this since Dissida, Dirge of Cerberus and Crisis Core.

What do you think about this game? Comment down below your opinions and let me know what you think? Did I miss anything?