Thank God it’s Friday! Today is Friday and here we are again this Friday. I hope everyone is doing okay this week and I hope everyone made it out alive. So far I got some video game news to tell. Sega recently announced that the upcoming Sonic game Sonic Force will allow players to create their own characters and help Seonic save the world. If Hedgehogs are not your thing, Call of Duty: Black Ops III recently released a DLC called Zombie Chronicles in which collects the Zombie maps from Black Ops 1 and 2 and World at War with the original cast (Dempsey, Nikolai, Richtofen, and Takeo). The map pack will have a total of 8 maps and remastered for the price of $30. If you want to experience Zombies again with the same characters in high graphics, download the game and the best part is that the DLC is out first on PS4!

Toonami will be busy because tomorrow is the final episode of the season 5 of Samurai Jack. After going through all the pain and suffering, the cartoon will reach the end and fans will witness the conclusion of Jack’s adventure.

Last but never the least, today is a special birthday to my Twitter friend and sister in Christ, Naj from @minna_satu. She is a loving friend that loves Disney, Kingdom Hearts and knows how to draw wonderful art. She is also responsible for drawing this picture of me and  @Keith_XV_.

She also the one in which I have been constantly sharing positive quotes with her. She is not active in Twitter and she is taking a break but I told her that I will be doing this shout out for her because she is my friend. Naj, if you are reading this, I wish to say Happy Birthday and God bless you! Here is a picture of me smiling. I know you like smiles and I am here to show you mine 🙂 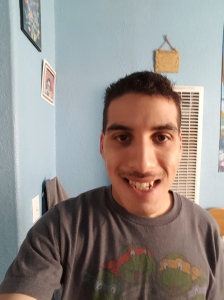 With this said, let’s have a laugh!

In honor for the birthday girl, here are some songs she loves to hear!

Here is some songs I chosen for her:

Happy Birthday Naj! Good bye everyone. See you next week!