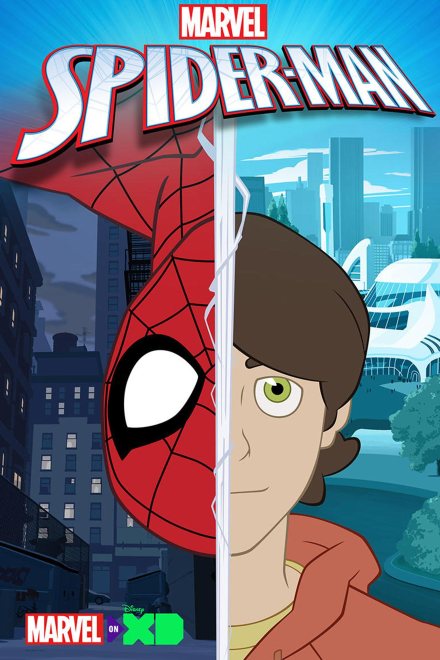 With Ultimate Spider-Man over and with the popularity of Spider-Man: Homecoming, Disney and Marvel are hoping to continue to the Spider-Man popularity and what better way to light up the fire with a new Spider-Man series replacing the previous show. This new series started in August 19th but in the Disney XD channel in YouTube, along with Marvel, they have uploaded a six-part short episode called “Marvel’s Spider-Man” Origins Short. In this post, I will be talking about Origins and my opinion in the first two episodes of the series.

(I will try not to spoil the episodes)

Peter Parker and his best friend Harry Osborn attend a field trip to Harry’s father, Norman Osborn’s, workplace, Oscorp Industries; the teacher guiding them is Spencer Smythe. While exploring the labs and listening to the presentation, Peter gets bitten by a radioactive spider on his hand and gets  ill. As Peter leaves by himself and tries to get a hold of himself, he later finds out he is able to stick to solid objects and have increased muscle strength in which all resembles a spider. Through out the days, Peter applies the Scientific Method to study his powers and then later create web shooters. In this six episodes, Peter learns how about his powers and even learns the harsh truth about responsibility.

At first I was very skeptic. I always enjoyed watching the 1994 series Spider-Man The Animated Series for the seriousness and amazing story of Peter/Spider-Man. I missed out on watching the Spectacular Spider-Man but I heard it was well-done because it focuses on Peter’s life in school and being a superhero and some criticized it for the simple art style while others appreciate the show because it resembled the Sam Raimi movies. Ultimate Spider-Man wasn’t the best show since it focused on a lot of humor and it didn’t feel like a Spider-Man series since Peter had to team up with other heroes and it felt like an Avengers or Hulk Agents of Smash  “team series”. Anyway before I get distracted, I feel like this short had a somewhat bumpy start but once after I saw more episodes, it got generally better. The reason why is because I felt like Peter talked way too much but I will admit, it was nerdy kid who used science jargon to talk to people and he was just getting used to his powers. I like how they kept him as teen in which made it the show feel like the comics. I like the easter eggs in this how when they refereed to Marvel heroes in which could possibly hint of Spider-Man teaming up with different heroes. One of my favorite moments in the short is when Peter goes to a wrestling match and fights Bonesaw McGraw, it made me remember the exact fight scene in Spider-Man 1 (Sam Raimi version). Like any other Spider-Man story, they did mention Uncle Ben’s death; I was worried on how will Disney handle this since they are known for censoring guns and death, but Disney was ale to manage it and still talk about death. I like how they kept homemade costume from Homecoming movie.

The show official debuts on Aug 19th and to start off the show, this episode consists of two parts. The show begins with Spider-Man fighting the Vulture as he tries to steal some precious materials. After stopping but unabling to capture Vulture, Peter goes with Harry to a orientation at Horizon High, a special school for science majors and genius, to meet the well-known teacher and scientist Max Modell. The Vulture returns and attacks Max and to make matters worse, Harry’s experiment in the orientation goes haywire and he gets blamed for it and put on temporary suspension. Peter must stop Vulture and protect Horizon High.

Even after getting accepted by Horizon High, Peter’s life is stressful when he has to fight the Scorpion and must cope with personal life. Not only he feels guilty for taking Harry’s spot, but he also has to deal with seeing his Aunt May go through the trouble of paying for his intuition. To matters worse, Harry requests Peter pick up his confiscated equipment from Horizon High but Peter gets suspicious when the gadgets is a bomb and then a robot spider, the Spider Slayer, shows up to destroy equipment at Horizon High. With this new change in life, Peter already feels like a tiny bug in world with giant issues.

With the origin story out of the way, I was ready for some spider action and this doesn’t disappoint me. Unlike watching the first episode of Ultimate Spider-Man, this Spider-Man show focuses on Peter’s personal struggles and his superhero growth. Like always, Spider-Man is a geeky and awkward kid who worries about everyone’s safety and concerns and this show does an excellent job on showing us what Peter is. In these first two episodes, we get a glimpse of upcoming friends and foes for Spider-Man such as Smythe and the Spider-Slayers, Harry, Otto Octavius and his friends Miles Moral.

I really like the voices for Peter for this one; unlike Drake Bell in Ultimate Spider-Man, Robbie Daymond does an excellent job and it’s funny hearing his voice and being the nerdy Spider-Man (he also voiced as Prompto from Final Fantasy XV and Tuxedo Mask from Sailor Moon Viz version). Max Mittleman also did an exceptional job and he also voiced Saitama from One-Punch Man. If you look at the cast for the characters, you might recognized them and some are from anime.

The art style is something to get used too. It short of feels like the characters look simple but the story so far is pretty good start. I think they were trying to appeal fans who enjoyed the Spectacular Spider-Man in art style and story.

Is Spider-Man (2017) worth watching on Disney XD? That kind of depends. I might stick around to see more episodes and it seems to soon to review the show it barely has two episodes and short. I think it has a good start and it might appeal to new and old fans to some who enjoyed the Homecoming movie. From what I assume, this show will probably try to aim towards to the Spectacular Spider-Man feel as oppose to Ultimate Spider-Man. Correct me if I am wrong but I felt like Ultimate Spider-Man felt like it was trying to be an Avengers series.

What do you guys thought about this series so far? Comment down below.