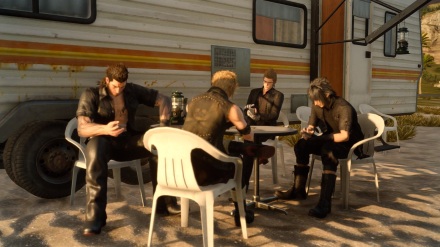 Revealed at the Tokyo Game Show, Square Enix revealed a new trailer to the game upcoming game Dissidia Final Fantasy NT. The trailer shows the heroes of light gathered together and  talking about what’s going on. The gameplay also shows an improved HUD screen and new action sequences. One of the biggest moment in the video revealed Noctis from Final Fantasy XV. The trailer shows Noctis fighting Garland with his fight style and his waypoint attacks. The game is set to be released in NA in January 2018 for PS4.

Also revealed today, Square Enix unvield another addition to the game Final Fantasy XV. On October 31, 2017, players who have the season pass will be able to download and play Final Fantasy XV Multiplayer Expansion: Comrades. In this video, players will be able to create their own avatar and with either partake in single or multi missions. Taking place within the story, your character, a Lucian Kingsglaive, will work with characters like Cor, Cid and others in hopes of fighting Daemons. The trailer even includes a new song composed by well-known Final Fantasy composer,  Nobuo Uematsu; the new song is titled “Choosing Hope”. Here is the synopsis of the story (This will contain Spoilers!):

For the first time, Final Fantasy XV players will be able to create their own character and join up with three other friends to take on epic quests and battles in the game’s first and only online multiplayer expansion titled “Comrades.” Starting October 31, players will set foot as a survivor from Kingsglaive to find out more about the disappearance of Noctis after the events in Chapter 13 from the main game. Set in a world engulfed by darkness, the expansion casts players as a member of the Kingsglaive, with powers and unique abilities invoked from various Lucian kings, who join forces to bring the Light back to the kingdom of Lucis. Other members of Noctis’s crew including Gladiolus, Prompto and Ignis will be made playable in future game updates. As members of Kingsglaive, players equip royal sigils that grant special powers from the Lucian bloodline. Players can then strategize and create a balanced team to take on a variety of quests. In addition to multiplayer quests, single player quests are also available for players to enhance their characters.

Released yesterday, Square Enix has finally released another port game of a classic for PS4. Final Fantasy IX joins the digital market at the PSN. Fans who remembered playing this game in PS1 can relieve it again on PS4. The game includes new additions just like Final Fantasy VII such as no encounters, auto save and many more. As part of the promotion, the game is currently on sale for 20% off and if players buy the game within 9/19 through 9/26, players will not only get the game cheap but they will be awarded with a custom theme for the PS4 and avatar profile pictures designed by Toshiyuki Itahana.

Get your game on!