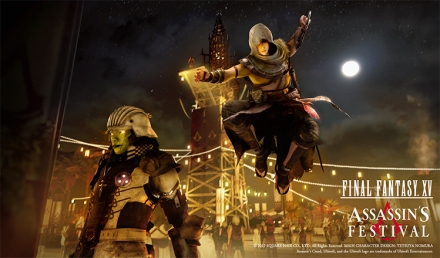 An all-new immersive Assassin’s Festival is overtaking the town of Lestallum!

Starting on August 31, 2017 until January 31, 2018, you can partake in this limited time event, featuring gameplay elements from the Assassin’s Creed game series, mini-games, and a chance to obtain exclusive items, such as the “Medjay Assassin’s Robes” for Noctis, Gladiolus, Ignis, and Prompto.

FINAL FANTASY XV: Assassin’s Festival is available as a free download from the PlayStation Store and Xbox Store.!