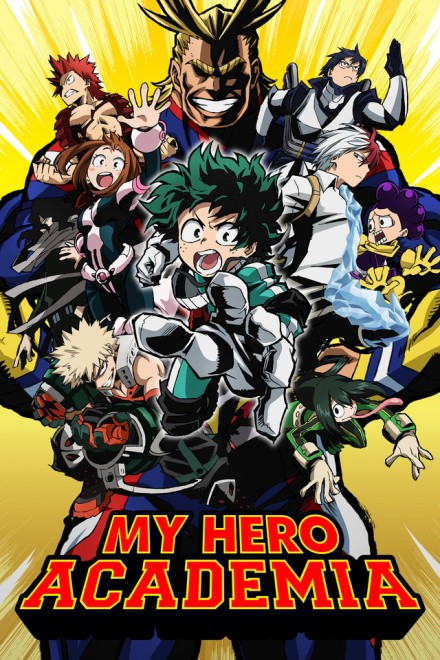 It’s an exciting age of heroes, where most people develop supernatural abilities known as Quirks. Bright-eyed kids like Izuku Midoriya—Deku for short—dream of the day they become champions of the people. There’s just one little problem standing in Deku’s way. In a world full of heroes, he’s Quirkless. Crushed, but not down for the count, this superhero-fanboy dedicates his time to studying the pros in hopes that he, too, can join a prestigious high school for heroes. In the face of despair, Deku’s courage catches the eye of his ultimate idol, the symbol of justice known as All Might! With special training from the big guy himself, Deku and the talented first-years of the academy may finally have a shot at achieving their dreams. But these amateurs are put to the test of a lifetime when routine training becomes a battle against real villains!

Welcome to another anime review and in this review, I will be tackling on the popular Shonen Jump Superhero anime My Hero Academia. This post will have no spoilers at all. I am pretty late on joining the series but nevertheless, I was able to buy season 1 and even though I had delays, I finished strong!

The story takes place in a fictional world of Japan where some people has acquired super powers from quirks, a special trait in which everyone has that makes them different. Some people with these special quirks decided to become Superheros while others have decided to use it for crimes. The protagonist of the series is Izuku Midoriya and he dreams of becoming a hero like his idol, All Might. Unfortunately, Midoriya is the only student in his class that doesn’t have a quirk and he gets criticized for his weak status. However, after learning about All Might’s dark secret and after All Might sees his determination of being a hero, he decides to train Midoriya to be a hero and helps him enroll into U.A.  High School, a school dedicated to teaching super heroes.

The show also focuses on variety of characters and the anime does a great job on introducing us to them. We have the frenemy Katsuki Bakugo (has the ability to cause explosions), Midoriya’s new friends Ochaco Uraraka (the power of gravity) and Tenya Iida (has the ability to go fast with engine like power) and many more classmates who also has unique Quirks. Along with the students, we have a flavorful of veteran superheros who not only protect people but also teach. One of the main heroes we meet is All Might, a powerful “Superman-like” hero who has incredible strength for power and speed who appears with a great smile and muscle mass. Besides All Might, we have interesting heros like the cranky but cool Shota Aizawa “Eraserhead”and the loud and excited Hizashi Yamada “Present Mic”.

My Hero Academia is real blast and the anime does a great job on introducing the world of superheroes. The anime is really short as it only has 13 episodes; however, the last episode leaves a cliffhanger and it continues on to season 2. Personally, I feel like Season 1 of the anime is great season to introduce the characters. One of the first characters you will meet is Midoriya and he starts off being like Peter Parker from Spider-Man, a normal kid that gets picked on for his weak status but then becomes someone great later in the anime. Midoriya is one of those characters where he starts off being whiny and weak but he does get better in the series; he does get scared but he is not someone who will run away. In short, he does improve and he is one my favorite characters. Another hero I like is All Might. I like his action moments whenever he gets screen time and I enjoyed the English Dub for him Chris Sabat. Chris Sabat does an excellent job on voicing a big muscular character and I couldn’t help but remember Armstong from Fullmetal Alchemist. The rest of the cast of the class is pretty good at voicing teenagers.

With all these characters in the anime, I can’t help but think of Attack on Titan. At first, My Hero Academia does mostly focus on Midoriya but in the later on around the last two or three episodes of the season, the show does focus on other characters. Maybe if I do a spoiler review or a random post, I will explain why I think this season reminds me of Attack on Titan. For now, all I can say is that the characters do get screen time and we do see some action on everyone. The pacing of the anime in my opinion is actually pretty good at starting off the anime. It helps introduce the characters and the atmosphere is a mixture of comedy, seriousness, and well-mannered; all good attributes for a Shonen series. Personally, I love the music in this show and I am not just talking about the OP and Ed songs. The background music in the anime could either resemble a classy “superheroic” tune or it can be a heavy metal music when the anime gets intense. I am not an expert on reviewing color or animation but I want to say that the animation is just fine!

Honestly, the only downside I had with this anime is the lack of introduction of villains. We do get to meet the antagonists of the series but it happens late but I think I will let it slide. Based on the last episodes, we might get more information on the villains in the future seasons since season 1 is an intro to the anime.

Is My Hero Academia worth watching? Honestly, yes it is! This anime has great characters in which gives viewers a choice or choices to pick who can be your favorite character. I only watched this in English Dub but I want to say that the English Dub is awesome. The season is a great start and even has a good cliffhanger that encourages you to watch more. The music is top notched and the premise of the anime makes it a great choice for Shonen fans. People who likes Naruto, One Piece or even the recent new series Black Clover will love this anime. If you like superhero characters from Marvel or DC, you will like this. I can’t wait to see more of the villains since they look way powerful as the veteran heroes and also intimating towards the students. This anime exceeds in characters, story, theme and music.

If you seen this anime, comment down below on your thoughts and opinions.

If you enjoyed this post, go check out my unbox post of the limited edition of season 1.