It’s the season of joy, thankfulness, and love. This month’s topic is “Warmth.” Whether it is spending time with family members during the holiday season or with that special someone during New Year’s, we will discuss moments in anime and pop culture media that convey a feeling of happiness in our hearts. During times of struggles, we look towards the things that matter to us as a source of strength, hope, and happiness. We hope you enjoy this round of posts and that you will have a wonderful holiday season!

(May contain spoilers from One Piece)

What’s the difference between warm and lukewarm? According to the definition, warm is moderately high temperature. For Lukewarm; however, it is only slightly warm. We usually see this comparison in water. When the water is warm, it gives a warm feeling and if you are washing your hands in a cold temperature weather, it gives you pleasant and comfortable feeling. However, if you used lukewarm water, you feel the warmth but it’s not strong and you still get the coldness on your skin. The reason why I used water as my example is to help illustrate the importance of warm and lukewarm feelings. Going back to the definition to warm, warm means showing enthusiasm, affection or kindness to someone. If someone is displaying warm feelings for you, you can see that the person cares about you and wants to show how much you mean to them. This feeling can be powerful and give you sense of belonging like being in a family love or friendship. Unfortunately, lukewarm affection is not the same. According to the definition is quite the opposite; in addition, the synonyms for this word means half-hearted and uninterested. When someone is lukewarm, they display feelings that does not appear as caring or they don’t show much love to anyone. As we get close to Christmas, there’s going to be a lot of people who either wants to share love to others or others who doesn’t express any emotions and might as well have cold hearts. In this post, I will be talking about the importance of warmth in the anime One Piece.

One Piece is a series that started off as a manga and then became an anime. It was created by Eiichiro Oda and the manga series is licensed by Weekly Shonen Jump and the anime is from FUNimation. The story’s setting is about pirates and it’s about a young man named Monkey D. Luffy who dreams of becoming King of the Pirates by finding the legendary treasure One Piece. One Piece is every sing treasure gathered in one place and it was originally owned by the deceased Pirate King Gol D. Roger (or Gold Roger). As Luffy sails to his goal, he gathers some new friends and even fights dangerous enemies like powerful pirates, marines and warlords. In the world of One Piece, there are some powerful fruits called the Devil Fruits and anyone who eats a fruit will gain amazing powers with the cost of losing the ability to swim and sinking down to the ocean. After eating the Gum-Gum Fruit, Luffy becomes a rubberman and he leads a crew of odd people in which they both have dreams. His friends include the swordsman Roronoa Zoro, the navigator Nami, the marksman Usopp, the cook Vinsmoke Sanji, the doctor Tony Tony Chopper, the archaeologist Nico Robin, the cyborg/shipwright Franky, and the musician Brook. Together, they are the Straw Hat Pirates.

In this topic, I am going to focus on one crewmember that has tons of warmth… Monkey D. Luffy.

Luffy – The man who loves regardless

Luffy is the protagonist of One Piece and is considered as one of the most popular Shonen Jump characters along side Goku from the DB series, Ichigo from Bleach and Naruto from the Naruto and Boruto series. What makes interesting about Luffy and different than these heroes is his personality and knowledge and fight style. When you first meet Luffy, he’s a total goofball that loves to eat food and befriends with unique characters. He can make reckless decisions or sometimes act laid back or jump into people’s business. However, whenever something serious happens when he fights, he acts different; more serious and smart. This usually happens if he sees one of his friends suffering or when a villain acts like he’s number one. Even though the series is known for action and comedy, this story does not hold back on moments like sadness and drama. Whenever we see Luffy interact a new friend they usually have a  depressing backstory and after a while, Luffy will accept them regardless of past. I will give you examples on his friends and Luffy’s reactions 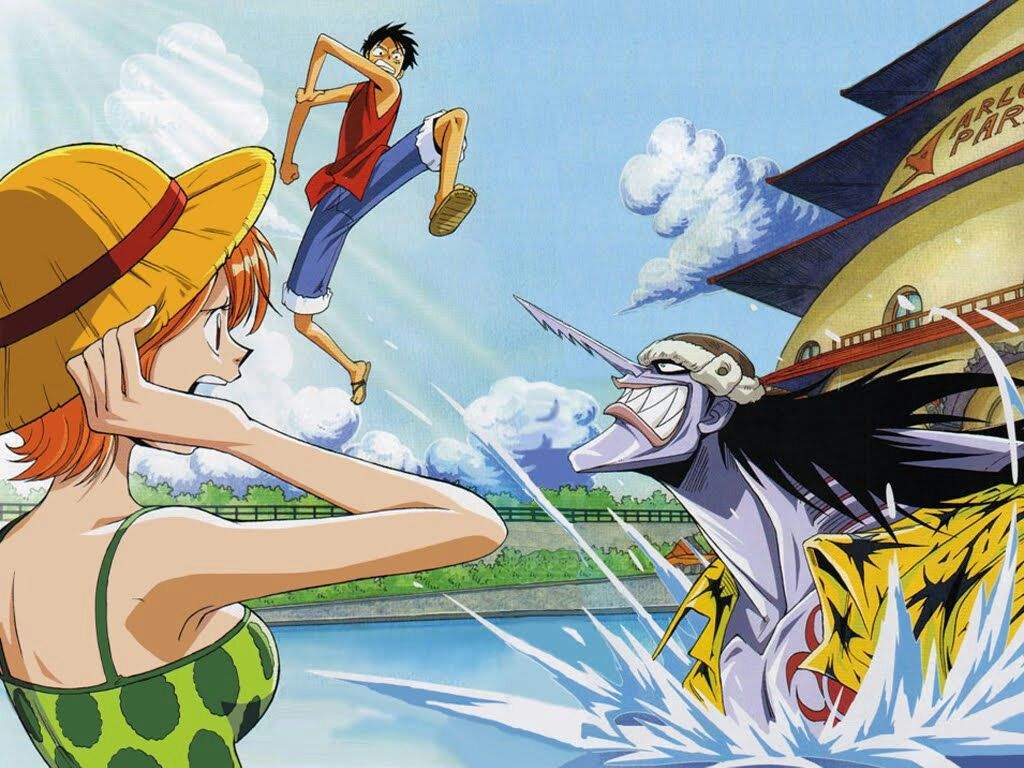 During the East Blue arc as well as Luffy’s early adventures, Luffy’s friend Nami betrays him and steals his ship and money and delivers all of it to her home town Orange Town to pay for everyone’s freedom from the clutches of the evil fish-man Arlong. Everything was going according to plan for Nami but all hopes of freedom is crushed when Arlong betrays her trust and works together with a corrupt marine officer and steal her hidden money. With her plan destroyed and seeing her people prepare for a battle to the death for freedom, Nami was ready to give up on life. Fortunately, Luffy and his friends (Zoro, Usopp and recently recruited Sanji) stepped in and fought her battles. The battle with Arlong and his loyal crew was tough but Luffy was not going to let anyone hurt his friend. Regardless to Arlong’s monster strength, Luffy relied on his anger and determination and crush his empire and he finally help saved the town. By the end of this battle, Nami decided to rejoin Luffy’s crew as a Straw Hat Pirate and set sail through the ocean and earn money for herself.

Another One Piece moment is when Nami gets ill during a mission to help get the Princess Vivi back to her home country and stop a war. When Nami gets seriously ill, the crew decides to stop from their mission and help save her and take to the best doctor in Drum Island. After surviving the cold tundra, Luffy and Sanji was able to get Nami to a doctor and with much surprise, the doctor is a talking reindeer named Chopper, he ate the Human-Human fruit. After witnessing Chopper’s transformation from reindeer to man, Luffy gets excited and decides to recruit him because of his abilities. Unfortunately, Chopper declines because he calls himself as a monster and he believes no one will ever love him. However, after dealing with some greedy pirates and protecting Drum Kingdom, Luffy still wants Chopper to join him not because he’s monster but he is a strong fighter and has amazing doctor skills.  As you can tell, Chopper does join and he becomes loved 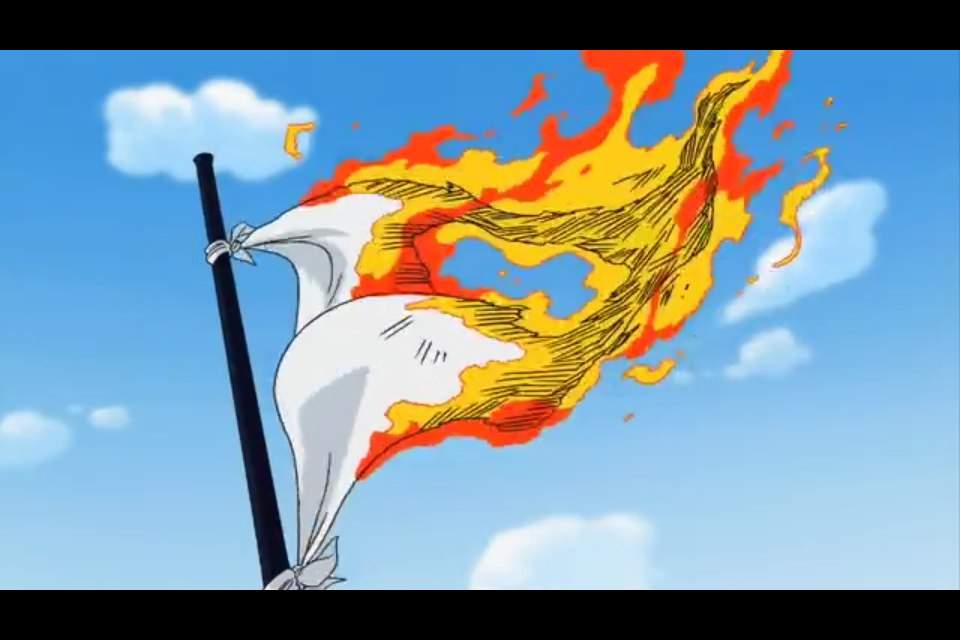 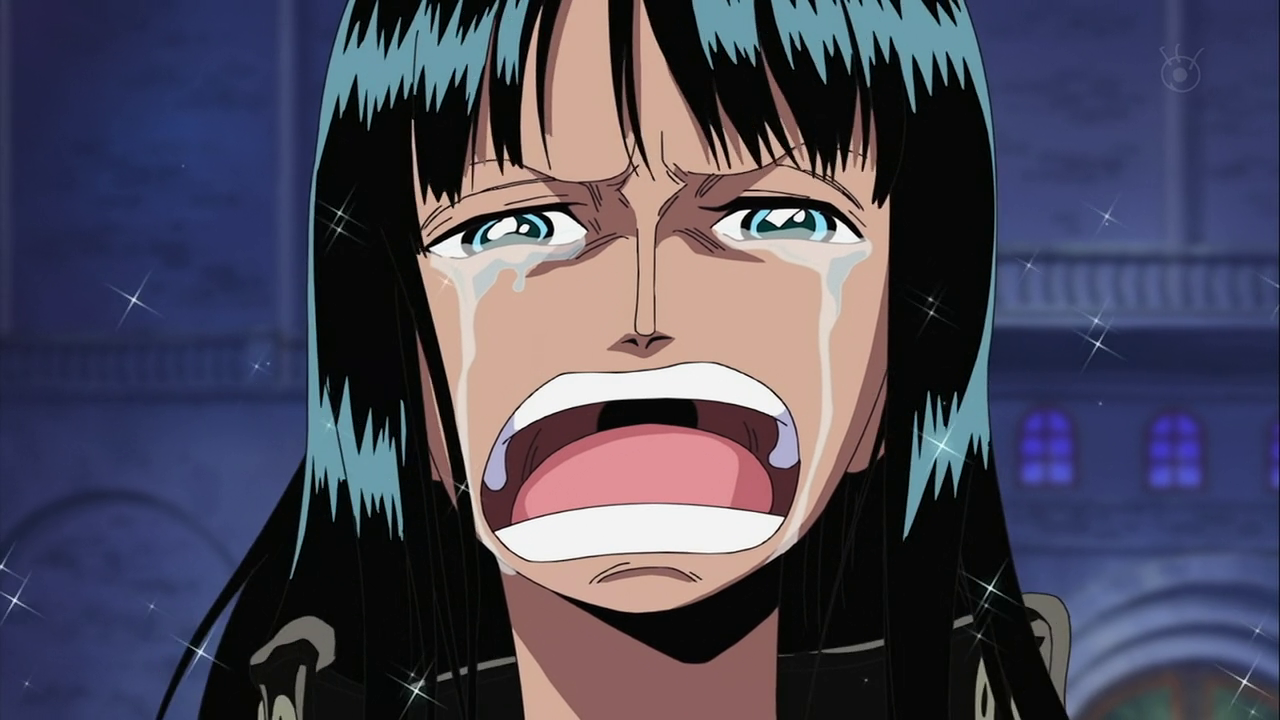 In the Water Seven arc, the Straw Hat ship the Going Merry is breaking down and it needs attention. They take it to Water Seven to find the best carpenter to repair her. However, problems rises when the marines are located at the area and they send in CP9, agents are work with the marines and have the ability to kill anyone. They have their eyes on the Straw Hats and they even blackmail Nico Robin that if unless she helps the marines find the ultimate weapon Pluton, they will kill her friens. Robin joins CP9 and tries to kill the mayor of CP9 and betrays Luffy. Skipping ahead, Luffy and his friends find out that the reason why Robin did these crimes and acted in betrayal was because she cares about them and was willing to die for their lives. In result, Luffy along with many odd characters decides to save her from the Government and CP9. While confronting Robin, Robin tells Luffy and her friends that she is doing this because she chooses to die; however, Luffy sees her and sees what she really wants. He tells the Sniper King to shoot at the flag of the Government in declaration of war. After doing this, Robing realizes that these people actually care about her and that Luffy is willing to go to war to save one friend. Robin then changes her mind and says she wants to live. She realizes that everyone has the right to live and Luffy and his friends really care about her. Someone with warm love will do anything to protect one’s life.

“Greater love has no one than this: to lay down one’s life for one’s friends.”

There is a lot of examples I could add to the post but these are something worth talking about. The point of this post is too show the importance of having warmth. As we approach the holidays such as Christmas and New Years, it’s important to reflect and appreciate how much love we have in our life. Imagine if we had a friend like Luffy, that friend will fight for you and even risk dying to protect your life. I wish I was like Luffy, someone who can smile at times of trouble and have the courage to fight any obstacle. I may not be Luffy but I am stronger with love.  Speaking of love, God loves you too. It’s mentioned in the Bible that God loves you so much that Jesus died for you so you can come to Heaven. Jesus conquered death. Thanks to Jesus, Satan lost and we have hope that we can find peace. We may not be perfect like Jesus but we can learn to love like Him. If everyone love one another like Jesus or Luffy, imagine never feeling isolated or weak. When you know someone actually cares about you, you feel important and you can’t help but share it.

Anyway, I hope you like this post. Feel free to share and comment down below. Also make sure you prepare to read the next person to write this topic, Zoe from Let’s Talk Anime. Goodbye and Merry Christmas and God bless you!

22 thoughts on “OWLS Blog Tour: One Piece – A man’s source of strength is a warm heart”