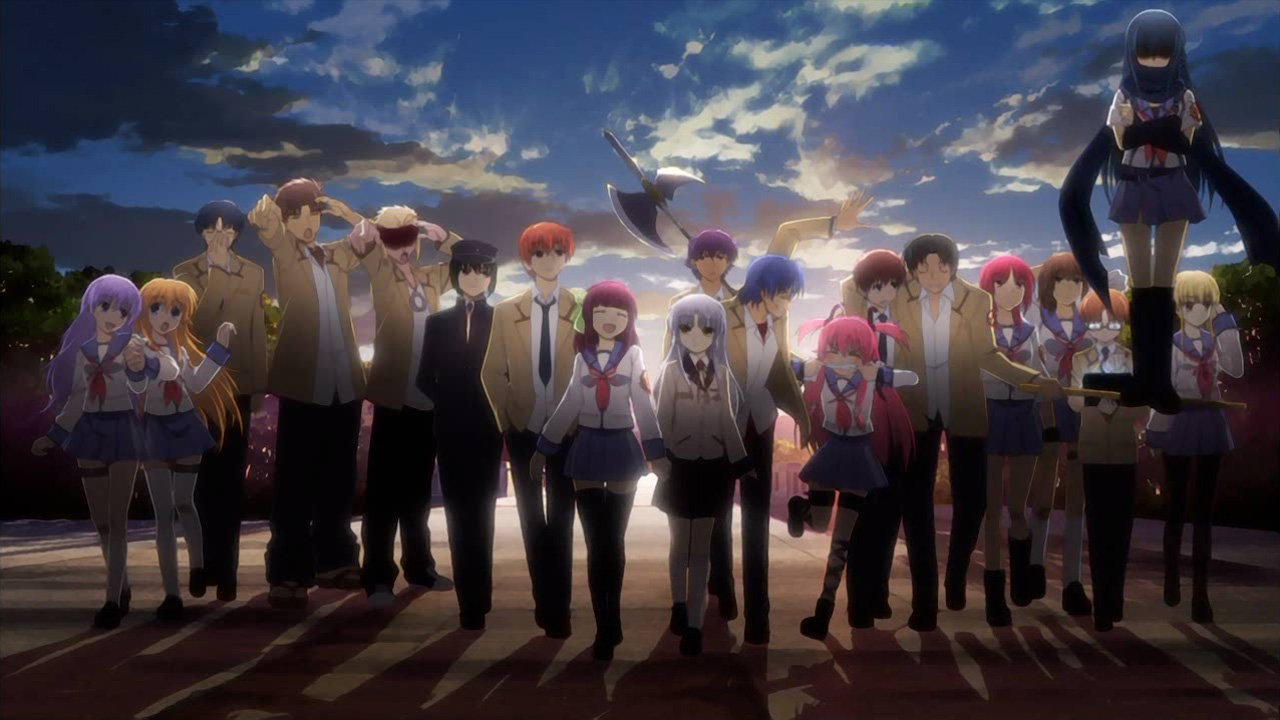 I first heard about this series around the time I finished Clannad long time ago. However, I wasn’t determined to get this and I decided to hold off from getting it. Fast forward to 2017, Sentai Filmworks announced that Angel Beats was going to lose its license because it was also owned by Aniplex of America and the contract was near its expiration date. However, unlike Funimation, Sentai Filmworks wanted to fans to own the copy as easy as possible and they sent out a discount code online and email so that if you wanted to buy Angel Beats on DVD or Blu-Ray cheap; this was only done by their shopping site and not Rightstuf. Thus, I took the opportunity and bought the DVD for about $17. Now that I own another Key anime, I will be talking about what makes this anime unique. Key is well known for publishing series like this along with Clannad, Air and Kanon. Jun Maeda is the co-founder for Key and he also created the stories.

Story/Characters: A cast of tragic, but silly characters trapped in purgatory

The story begins with an amnesic high school student named Yuzuru Otonashi who suddenly wakes up in the middle of the night outside the school field. Everything feels weird for Otonashi because he doesn’t know how and what happened while he was passed out. Things get even weirder when he meets a stoic, but dangerous girl nicknamed “Angel”. The introduction between these two comes to a close fast as she kills Otonashi by impaling him; however, he also sees another unusual girl named Yuri who, for some reason, with an army tries to attack Angel. The next morning, the once dead Otonashi wakes in the school’s infirmary with all his wounds healed. As he meets Yuri, he learns that he is dead and all these students are like him, dead, but not yet ready to pass on to the afterlife. Yuri is the leader of the SSS organization and it’s the teams goal to defeat Angel and wage war against God for making their lives terrible. Along the way, Otonashi makes new friends as he helps them reach their goal and learn about his life and how can he help everyone pass on to the next life.

Overview: 13 episodes of tears of joy and sorrow

This anime truly feels like a roller coaster of emotions. When you first start watching this anime, the characters are ridiculous in their own way. Otonashi, in my opinion, is probably the most normal character in the anime and I really like this guy as I got to learn about him. Yuri is a pretty awesome girl who makes a great leader and some parts, mostly in the OVA, she acts like the villain  and it adds humor to her character. Overall, the characters have their quirks which contributes to making the story funny and fun-filled along with making serious situations feel at ease. I watched this anime in English Dubbed and it felt like I was watching Clannad, because most of the characters from Clannad came together to play the roles of the students. Characters like Hinata was voiced by David Matranga and Yui was Hilary Haag (in the parts where she sings, LiSA does the singing voice.) and all I can see is Tomoya and Fuko from Clannad. However, that’s only one side to the emotion topics. As you learn about the characters, the story gets dark and depressing when you learn about some of the character’s past life and why is it impossible to move on. There were times I did cry when I learned about their pasts and it made feel bad for them. It makes me wonder why does bad things happen to good people or why does misfortune hit the innocence. For thirteen episodes, the anime’s pacing was pretty moderate and the story plot constantly changes. There are times where the group have a goal and then the next portion of episodes, something happens and they get a new mission. The anime’s music was the best thing to listen to while watching the anime. Whether it was the opening/ending songs or the background songs, I don’t think I recall skipping anything. Just like Clannad, this anime’s art and characters is pretty amazing and once I got hooked on the story, I was determined to finish it.

Flaws: Too fast to understand

Even I enjoyed this anime, there were some minor flaws. Previously mentioned, as I was learning about some of the character’s past life, I didn’t get the chance to learn about everyone. I won’t spoil it, but there were only a few characters I got to learn and it’s shame I couldn’t learn about the others. I think it’s because of 13 episodes, we had to focus on the story while learning about characters that were considered important. The ones who didn’t get the chance to share us their story, became one dimensional characters. Like also mentioned, the anime’s tendency to bounce between sad and laugh out loud moments did have issues. As I watch these characters get killed in silly situations, the episode can sometimes unexpectedly change the mood and it feels like my emotions are forced from smiling to sadness. Sometimes it is handled well, but then other times I felt forced.

Should you watch this anime before you die? In my opinion, I would strongly recommend it! If you want an anime that is going to make you laugh, but also hit your emotions just right, watch Angel Beats. The animation and music is top notched, and if you enjoyed anime like Clannad, you will fit right at home. The characters are a lovable bunch and the story’s plot adds more excitement and a craving more. For 13 episodes, I wanted more adventures with the characters and I wish we got to learn more about the backstories of each character. The English Dub is pretty good in my opinion even though I did feel like I was watching Clannad again. Even though this anime may provoke Christians because of the atmosphere of people trying to challenge God, it gives you a different perspective on why do people show hate to the lives they were given. The anime knows how to hit the feels and the times when things get sad can be unexpected like something you would see in a sad Simpsons episode. If you plan to watch it, I recommend buying the series (DVD or Blu-Ray) so you can get thee OVA. The OVA is funny episode and it takes away the seriousness of the anime.

Did this review help you? What do you think of Angel Beats? Comment down below and don’t forget to donate to my Ko-fi page. I would be extremely happy to see someone buying me coffee.