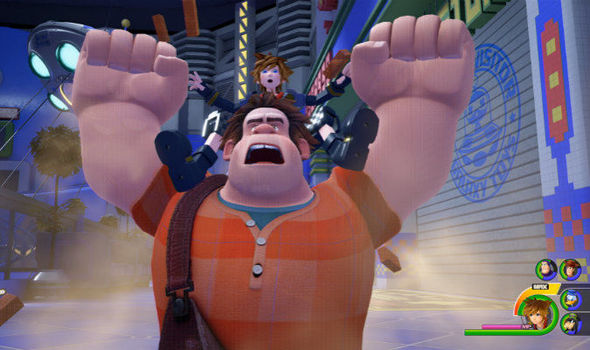 According to gameplays and screenshots, we got another Disney character joining Sora’s adventure, Video game character Wreck-It Ralph will be in Kingdom Hearts III and helping Sora; however, Ralph will be a summon character where Sora can call him and use him to fight.

We had more friends stop by the #kh3premiere and try a sea salt ice cream ☺️ pic.twitter.com/SS1R4JSJZA

Also revealed in the game is Sora’s new Keyblade abilities and fight style. Based on the pictures and videos, Sora can use different fight depending on what he uses. For example, using the keyblade based on Monster’s Inc. will allow Sora to transform his weapon into yo-yos and either use laser attacks or trap his enemies.

Shown in another gameplay, Sora can also use his environment for combat such as running on the walls similar to flowmation. Sora’s other attacks involves him using Disneyland’s live attraction rides as attacks which can help him fight bosses and enemies.

As a funny Easter Egg and tribute to Final Fantasy, Dissidia Final Fantasy NT makes a surprise visit in the world of Toy Story. Even the character Rex makes a comment about playing video games and referring back to Final Fantasy.

Dissidia Final Fantasy Nt at Galaxy Toys in KH3. You can see the Summon toys for sale. (@KingEphemera) pic.twitter.com/fVFyY6xDUr

Unfortunately, we still don’t know the release date, but according to game director Nomura, he mentioned that the announcement of the release date should be coming probably in next month. My guess is that we will find out at E3 2018.

What do you think about this game? Kingdom Hearts III is coming out this year for PS4 and Xbox One.