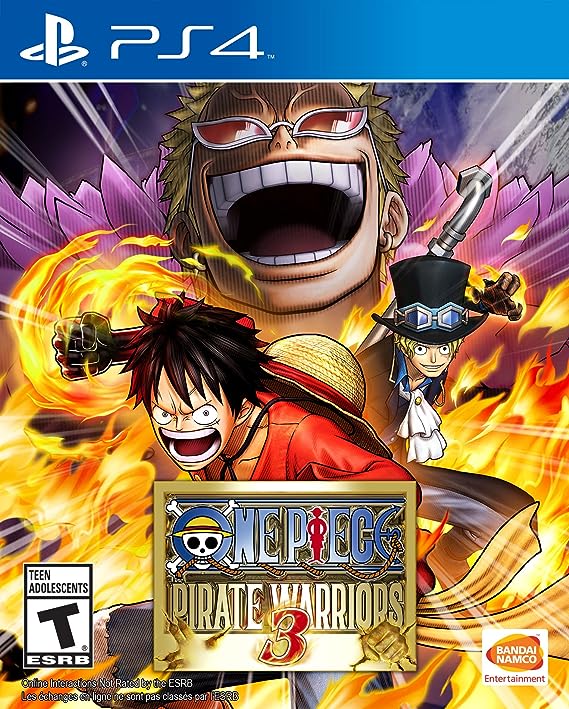 Join Luffy and the Straw Hat Crew on their biggest adventure yet! One Piece Pirate Warriors 3 allows you to re-live the original One Piece story from Fushia village, where everything started, to the kingdom of Dressrosa, a mysterious island dominated by the evil Donquixote Doflamingo, known as the “Heavenly Demon”. Do you have what it takes to defeat the most dangerous pirates, including Doflamingo and many more? Gather every member of the Straw Hat Crew and sail to the most emblematic places and enter the most epic battles: Marineford, Fishman Island, Punk Hazard and Dressrosa!

*There will be no spoilers, but if there was any, I will keep it a minimum

You know the old saying, second verse same as the first. Once again, Bandai Namco of Entertainment and Omega Force came back together and created the third Pirate Warriors game. This time however, the game’s story covers the beginning of the manga and the once recent arc in Dressrosa. In this review, I am going to be talking about this game and what’s special about this game compared to Pirate Warriors 1 and 2. This will only cover the PS4 version and I did not play the PC version or the updated Switch version.

In this updated sequel, the game’s story is set up to the beginning of Luffy’s adventures where he starts off his pirate adventures and meeting friends and making enemies. Unlike the first game, the game doesn’t skip parts and this gives us the opportunity to reenact moments from the series like saving Zoro from Axe-Hand Morgan or protecting Syrup village against Kuro and his pirate crew. Originally in PW1, you don’t get the chance to fight these minor villains and the story itself skips real quick in order to meet Luffy’s friends. The game even expands after the timeskip and let’s players enter islands in the New World like Fishman Island and Dressrosa. Unfortunately, in my opinion, by the time the game reached to Dressrosa, the manga was still in this part of the arc and didn’t reach the conclusion. To improvise, the game decided to turn this part of the story into a Dream Log in which is similar to PW2 where the game makes up it’s own story by having multiple characters that were not present in the series and having an ending that doesn’t connect to the manga. You can unlock the characters like Sabo, Fujitora and Doflamingo in this game, but there is no Gear 4 Luffy.

As usual like the past games, the game is back with the same combos from before. Depending on what character you use, you can combine fast and strong attacks and perform signature moves to make fighting easy and epic. Characters can perform unique attacks base on their own skills such as Luffy performing his Gum-Gum Pistol attack and attacking from distance or using Zoro and charging his attacks and pierce defenses. New to the game is the Kizuna Rush. In order to use this new feature and how it works, the player must have at least one AI partner in the game and as you fight, your Kizuna meter fills up. Filling it up partially allows you to call upon your partner in the end of a combo and helping you do more damage to the enemy. Filling it up completely and using it allows you use not only using your partner’s full power, but you also trigger your own abilities. Some characters may even use Haki and inflict damage on enemies that can’t be touch with normal contact like enemies made of sand or fire. This also allow Logia users to become invulnerable and phase through normal attacks. Last but not least least, if you have at least one partner or up to four, you can use a Kizuna attack where everyone works together to unleash a devastating blow and wipe out the entire battlegrounds.

Coins returns and once again, they are used again to power up the characters stats. It is very important to do this since this will unlock more abilities and even uncap the level 50 mark and make you go up to level 100. New to the game is Dream Log where you can explore islands and do missions. Sometimes you are forced to choose a side and you have to help your team win as well as perform spontaneous missions that pop up during the middle of the main mission. Doing these challenges allows the player to unlock more characters that are not unlocked in the story mode.

What do I have to say about this game? One Piece: Pirate Warriors 3 is a great new addition to the Pirate Warriors series that will keep you entertained. However, if you played the past games from before, you might have already expected the same formula. The positives is that the story is very immersive and it sticks to the manga/anime. You can interact with characters that doesn’t get a lot of attention from the beginning like Morgan, Wyper and Alivida and even use fan favorite characters like Shanks, Sabo or Gecko Moria. The Kizuna Rush is a fun tool to use if you want to score big numbers and help you get rank S scores. Unfortunately, this game definitely suffers from repetitiveness. Regardless if you are playing the story or dream log, you are going to find yourself doing the same strategy over again if you are aiming to get perfect scores or leveling up your favorite characters. The last chapter in the game is Dressrosa and that’s the only chapter that has an original story meaning that the manga didn’t finish this part of the arc and the game had to improvise and make up the conclusion of this arc. In a nutshell, this last chapter pulled a classic Fullmetal Alchemist or Hellsing on us. In my opinion, I felt like if the game would have waited until the story gotten pass this part of the arc, we would have more opportunities see even more characters like Rebecca, Bartolomeo or even Doflamingo’s family.

Is One Piece Pirate Warriors 3 worth the money? As a One Piece fan, I could argue it’s worth it if you enjoyed the characters and don’t mind the repetitiveness. Personally, I would recommend this game if you never played the past games. I played the games from before so once I got this game, the gameplay mechanics was easy to learn and I had no trouble figuring out how to play. The game even gives a quick tutorial just in case you need a refresher, but if you are new, you should really take the time to study the game. Overall, if you played games like Dynasty Warrior or The Legend of Zelda: Hyrule Warriors, it’s the same concept but with One Piece characters. I would recommend this to fans of the anime and new people if they want to get into One Piece fast; but I strongly recommend at least reading the manga so people can understand the story. This game is also on the Switch so if you have a Switch and you want DLC for free, get this game so you can play on the go and fight with your favorite costumes. I certainly enjoyed using characters like Shanks and Sabo and I really love how they used Nico Robin’s model of this game. The characters are stunning and the story really makes you feel like you are watching the anime. It feels like the game took it’s time at the most to try and make you feel as if you are part of the journey. Also, there is not button mashing so that means you’re controller is safe.

What do you think about this game?