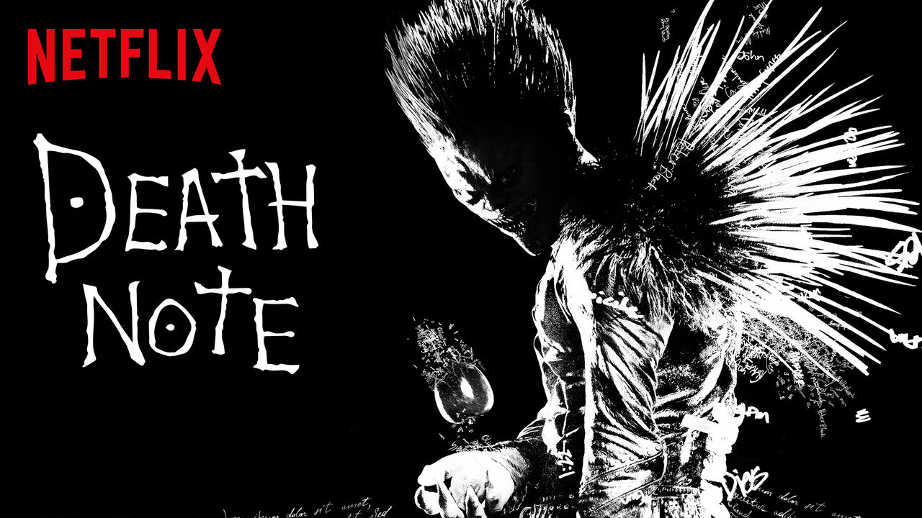 Light Turner finds a supernatural notebook and uses it to mete out death, attracting the attention of a detective, a demon and a girl in his class.

*This review will not have any spoilers.

Death Note is a real popular series because of the main characters and the premise of the story. A story about a notebook that can kill anyone with a name and picture of the victim and a story about two different characters playing a huge cat and mouse game in debate what is justice is something an anime fan can enjoy. Death Note first started as a manga and then it got an anime and later on, it got live-action movies, a TV series and even a play. Death Note has more fans than people who supports Kira, but when a series that popular is that good, there is always a black sheep in other media. First it was going to be in the movie theaters, an American Death Note movie was announced and it got moved to Netflix. Directed by Adam Wingard, well-known for horror flicks like You’re Next and The Guest, the Death Note movie got a huge make over by changing the original content, but also retaining the major themes. In this review, I am going to be talking about the movie’s plot, characters and what overall opinion.

Like the original series, the story begins in a high school where Light Turner is having a normal day until he sees a notebook fall down from the sky. He picks up the notebook and reads the rules that states that whoever owns the book can kill anyone by writing down the name by seeing the face and knowing their names. While in possession of the notebook, he meets the disturbing death god Ryuk and learns that the owner of the book has the power to kill anyone by writing down the names. It doesn’t take long for him realize the powers when he uses it on killing a bully at school. When he fully sees the power of the book, he believes that he can use it to kill any criminals by giving them a gruesome death by manipulating their actions. Joining his quest for peace and judgement his girlfriend Mia who also wants to help kill off evil. Just like original series, the police hears about these constant deaths and they call up the greatest detective, L and his servant Watari. The movie shows a constant battle with the smart kid Light and the enigmatic sweets loving detective.

The movie version of the series really changed the character’s in personality and background. Besides the name changes, Light Turner acts not like much of the version from the manga/anime. In this version, Light is a smart student at school, but he is willing to help students cheat on homework in order to make some money. He also complains a lot when he feels unjustly accused like getting into trouble because he got beaten up by a bully. It’s revealed in the movie that he only has a dad and their father-son bond is rather rocky when discussing about justice. Mia, who is supposed to be the American version of Misa, also underwent some major changes. Without going into details, Mia acts like Kira from the anime and she is willing to do anything to preserve the Death Note. L in this one like the series where he likes eating sugary snacks and staying hidden at the most. When things get tense for him on the plot, he does get involve in the action and get aggressive when facing Kira.

Overall – Not the best for fans, but…

What did I think about this movie? As someone who watched the anime twice in the past and seen the manga, this movie interpretation is unique, but doesn’t feel like Death Note. Even with the characters and the themes in it, I feel like this movie didn’t sit well in my stomach. First of all, I personally like William DaFoe and his performance as Ryuk. I seen his performance as the Green Goblin in Sam Raimi Spider-Man movie and I feel like he did an excellent job of being a creepy character who enjoys tormenting people’s emotions. I was actually surprised to see how they did this movie in a different setting than Japan. In my opinion, it sounds pretty cool and it shows that anyone involve with notebook can affect people regardless of location. The deaths in this movie was beyond gruesome because of the gore was used. I haven’t seen the Final Destination movies, but if you seen any of the movies, Death Note uses the graphic deaths as opposed to using heart attacks. If you like gore than heart attacks, this movie doesn’t hold back. I feel like Light and Mia’s character has also been altered too. Mia is someone who will takes risks in order to keep the notebook, while Light complains and wants to keep it for himself and be with Mia. In my opinion towards Light, he acts more like Milhouse from the Simpsons revenge where Mihouse gets revenge on all the bullies. I was impressed of what they did to L in this movie. At first I was skeptic, but after seeing Lakeith Stanfield imitate L and even do stuff that seems like unlikely of L, it actually made me sit close to my laptop and wanted to see more of him.

Should you watch this American version? Personally, if you are a fan of Death Note, you might not like this movie at all. The characters are different than the original source which can give fans a bitter after taste especially if you have a favorite particular character. The deaths in this movie is over top graphic which can resemble other suspense horror movies like Final Destination. Personally, I feel like this a movie for someone who is not a fan of the series or anyone who doesn’t know Death Note. I like the idea of the director what he was trying to do and give the setting a twist and making it more of North America. I applaud his creativity. I will admit, the ending makes me want to see of what’s going to happen. Overall, this is not the best Death Note movie and I don’t fans will like it either. What did you think of the movie? Comment down below on your opinions.