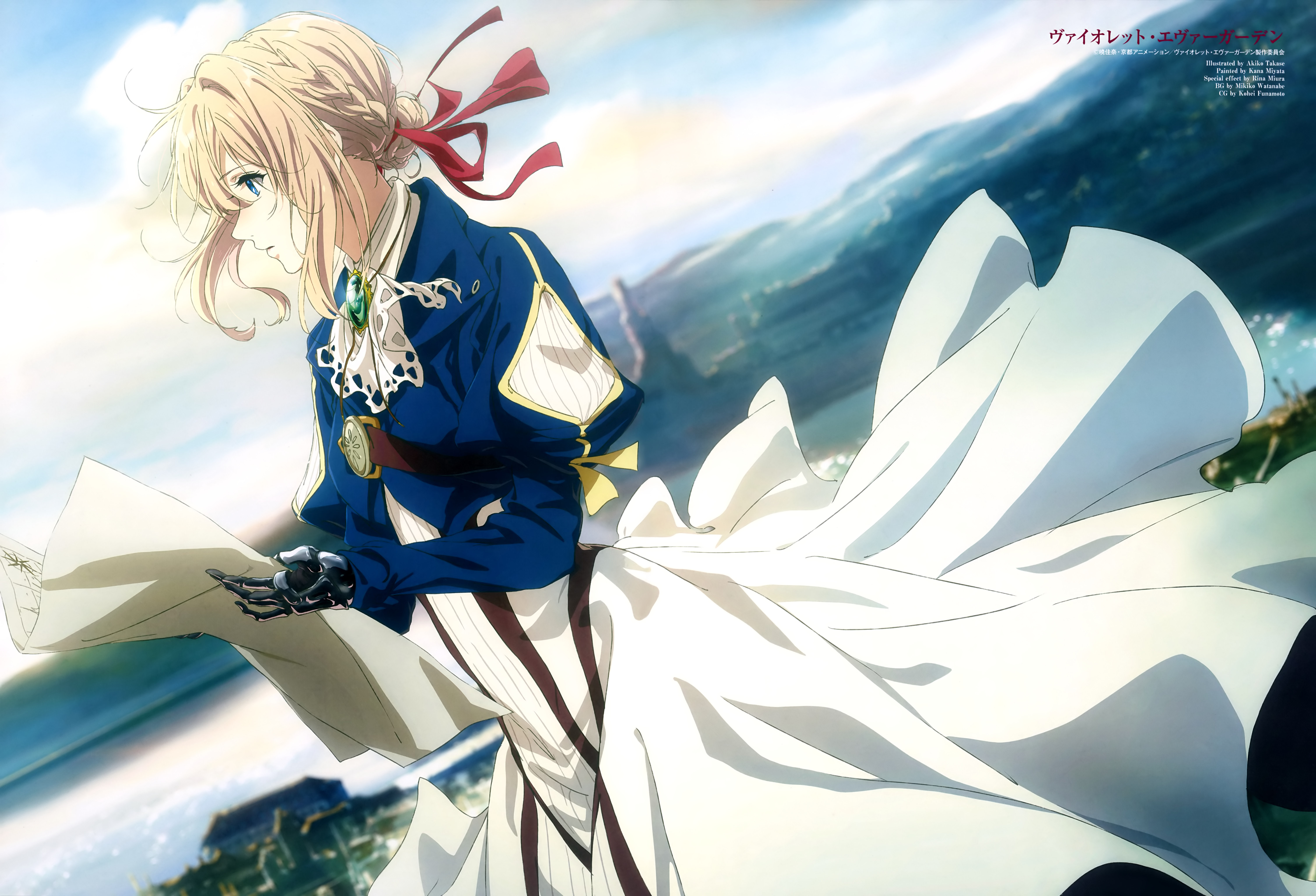 The war is over, and Violet Evergarden needs a job. Scarred and emotionless, she takes a job as a letter writer to understand herself and her past.

Here’s another good anime I found on Netflix. After finishing Devilman Crybaby, I decided to try out this anime Violet Evergarden. I heard this anime is one of those series that will make you cry and I wanted to see if it can really hit my feels. Also, the main character is voiced by the awesome voice actress Erika Harlacher (well-known for being series like Persona 5 game, Hunter x Hunter and 7 Deadly Sins). Violet Evergarden is based on the light novel written by Kana Akatsuki and illustrated by Akiko Takase. According to Wikipedia, the anime got an OVA in July 2018 in Japan and a movie is planned to be made for 2020. In this review, I am going to be talking about this anime and letting you know what’s my thoughts and it’s up to you if you want to see this anime.

Story – A soldier no more, a writer she is

The story tells of a young girl named Violet Evergarden who is awaken at a hospital after surviving war against the enemy country. Still recovering, she tries to write a letter to her major named Gilbert Bougainvillea, but after losing her hands and getting adamantium hands, she can’t properly write on paper. She meets Claudia Hodgins, a former officer in the war, and he helps her get back on her feet and tries to help her find something to do that is not war related. Feeling lost without a purpose or a command from the major, she gets a job at his job at the CH Postal Company in which he owns. When she finds interest of seeing people write letters for others who can’t write, she decides to take the job as a Auto Memory Doll. An Auto Memory Doll is a paid writer who is willing to write letters for people can’t write and needs someone to be their voice in writing. Auto Memory Doll first conceived when a husband scientist was writing novels for his blind wife when she wanted to write stories due to her disability. Violet Evergarden tells the story about a girl who was raised in war and tries to reconnect her missing emotions by writing for others.

Characters – A girl who tries to learn “I love you”

The main character follows Violet Evergarden is devoid of human emotions. When she is first introduced, her word choice and actions are derived from experiences in the military. For example, whenever she introduces herself, she does a salute instead of greeting people by lifting her skirt gently. She first also describes her writings as reports which annoys people when asking for personal letters. The other characters that sometimes make an appearance are those working in the CH postal Service. Besides Hodgins, we have other Dolls such as the close friend and lead of the Dolls Cattleya the tan skin and cocky writer Iris and the timid writer Erica. Most of the story focuses on Violet and her interactions with people who needs a writer. Whether it is a love letter or to write out a story for a play, Violet uses her skills in hopes to help not only help people, but this also helps understand and awaken her emotions. Through out the story, we also get to learn about her past and the reason why she cares for the major.

The anime was done by Kyoto Animation. If you don’t know what they did, they did anime such as Clannad, K-on and Hyuoka; however, this anime animation really feels like it was done by the hands who worked on the sports anime Free! Iwatobi Swim Club.

After surviving through thirteen episodes, I want to say that this anime does an excellent job on making me cry and feel for the characters. This anime especially made me feel for Violet and learning about her made me want to give her hug and tell her I love her. I watched this anime in English Dub and I felt like every voice actor nailed it in their roles. The story in this anime does have a plot and sometimes there are episodes it can be slow and episodic. The first couple episodes focus on Violet and her beginning as a Auto Memory Doll, later on it’s about her journey and learning about people and then we get on track and focus about her past and the future. I am actually surprised how well the plot is developed and how much we learn about the characters. In these “episodic” episodes, we are given the time to learn about the new characters and their background story. These new characters also help Violet re-learn about herself and gives a stepping stone to knowing “I love you”. The anime’s opening and ending is another sweet treat. The anime opening has a gentle and soothing vibe that puts me at ease; it was so good that I never skipped the intro on Netflix. Likewise, the ending does the same treatment. This anime does an excellent job on hitting your emotions at the right spot and there was episodes I did cry more than once. There is some action moments in this anime that deals with Violet in the war and personally, I thought it was pretty cool. It can get bloody so prepared to see some blood violence.

Was this anime worth the tears? Yes! This anime is something worth watching if you have Netflix account. This anime is pretty short so unless you have time and you are strong enough to watch it without dying from the feels, you can probably finish this anime in no time. Violet is a very unique and interesting character and I like how she first starts off being a monotone character to someone who later changes and become special. The other characters help motivate the plot and assists Violet’s goal in the story. The animation and music is the best eye and ear candy. Like I said, this anime will most likely hit you where it hurts and it is going to happen a lot. I think the only I can say that might displease people is the bittersweet moments can sometimes make feel a bit sad as viewers follow Violet’s life. The anime does start slow as we see Violet adjust to her new life as a writer, but once we get past it, the story moves on and the plot soon gets interested. This is an anime I would recommend watching even if you are not an anime fan. The setting is good place and makes it feel like you are watching an Oscar nominated post war movie.

What’s your opinion about this anime? Comment down below!