Sword Art Online Alicization has been getting a lot of attention lately and some of the reasons are mostly controversial and some minor good. Let start with the good news.

It’s been announced that there will be a new OP and ED song for the next episodes of Sword Art Online: Alicization. The OP for this second part of the anime is RESISTER by ASCA. The ED will be forget-me-not by ReoNa.

I am late in joining the series and I need to get started on this series, but recently, episode 10 of Sword Art Online got really dark. If you guys thought episode 1 of Goblin Slayer was too dark because of violence and rape, well you might get bothered in this episode. Episode 10 of Sword Art Online: Alicization contained some extreme violence and even sexual assault in which warned anime viewers ahead of time to those watching in Crunchyroll. This anime had to get it censored in some platforms such as Crunchyroll. The one in charge of censoring and editing the specific scene is from Aniplex of America.

This episode was described as one of the most violent and uncomfortable episodes that even Sword Art Online creator Reki Kawahara wrote to the voice actors on Twitter saying sorry that they had to perform this scene.

“Ms. Ishihara, who plays Tiese, and Ms. Kondo, who plays Ronye, both performed a painful scene with aplomb. Thank you so much! And I’m sorry, I’m so sorry.”

Here is the response from one of them:

“Thank you! I think that everyone became stronger because of the experience! I will continue to work hard alongside Ronye. I’m looking forward to what happens next.”

I haven’t seen this episode, but I will say sexual violence like this does make me feel uncomfortable, but it’s something that we can’t deny that it’s real. There is someone that commented on the video comparison saying something about this scene:

Monta Anik: “This scene is just realistic. This is the world we live in. And the author is only showing it. Many people abused of women because of their noble rank. I called this episode: Hard reality of the old time”

Yes, I will admit, Kawahara does add this stuff in his works from the first season of SAO in the Fairy Dance Arc, SAO II with Sinon and now this. I can agree with this person that the reason he put these stuff in his works to show the scary reality that there are some people who wants to take advantage of the weak. In episode 10, we see high ranks people tormenting women and trying to get what they want because they think they’re better. I am not saying that this is true for everyone, but what I like about Reki Kawahara is that he doesn’t hold back on the truth. Does it make you feel uncomfortable? Yes, but it’s something to be aware of in reality. Other than that, if you think this episode was dark or even this anime, do not watch Beserk, Helssing Ultimate or Goblin Slayer.

If you think that stealing someone’s art was bad, imagine Netflix using someone’s art for their shows. I am not sure if it’s already taken care of, but based on an article by ANN, Netflix apparently used someone’s fan art as a banner for the anime Sword Art Online. The picture was taken by a user and identified the art by Keeta from their Pixiv.

Is… is Netflix using fanart for their Sword Art Online banner? Not sure if this is the source: https://t.co/EMXIWb8Tge pic.twitter.com/XQ6FUlW6wM

I don’t know the situation right now, but Netflix is trying to resolve this issue. 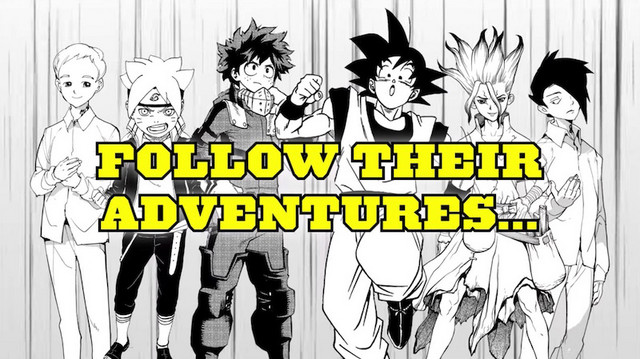 Do you like reading Shonen Jump manga like Naruto, One Piece and My Hero Academia? Do you want to be able to read these manga and support your favorite authors? I got great news for you! It’s been announced from Viz and Weekly Shonen Jump that they’re planning on starting a premium plan as low as $1.99 for people to read manga!

Hisashi Sasaki, editor of Weekly Shonen Jump in English and Japanese, mentioned that the goal for this new plan is to help bring in new members and fans and help support legal manga. Instead of being called Weekly Shonen Jump, it will be called Shonen Jump.

According to the Viz site, Shonen Jump will begin on December 17th, 2018 (same time as Tumblr will remove all +17 content lol). Free users will access to these here:

However, if you want to pay for the plan and show support, here is what you get even more:

You’ll get a free trial of the plan. The price is very small if you are doing monthly. You’ll get access to a ton of manga chapters from different series.

Also announced, according to ANN, Shonen Jump will be adding more manga for the line up that you don’t usually read in the magazine. Here is what is being added:

What do you guys think about this new plan? Instead of reading a magazine, you are going to be reading a vault of many chapters from your favorite series on the app and website. You will be able to read manga legally and support the authors without using a shady scanned site.

Revealed yesterday, studio company Paramount Pictures just unveiled a live action teaser poster for the upcoming 2019 movie Sonic the Hedgehog. Just like Detective Pikachu, this is another movie adaptation of a video game.

The guys that brought you Deadpool & The Fast and the Furious are bringing SONIC THE HEDGEHOG to the big screen! #SonicMovie speeds into theatres Nov 2019.

Check out the new teaser poster, and click to read what they had to say about making the film: https://t.co/bdCPODHdVg pic.twitter.com/LMakeasL6y

Revealed on this poster, this movie will be released on November 2019 and the people working on movies will be the same people who did Deadpool and Fast and the Furious. The voice providing the main hero Sonic will be Ben Schwartz and the villain Dr. Eggman will be done as Jim Carrey most likely be acted than voice. However, after the poster was revealed, most Sonic fans and even non fans gave bad responses. What do think about this tease image?