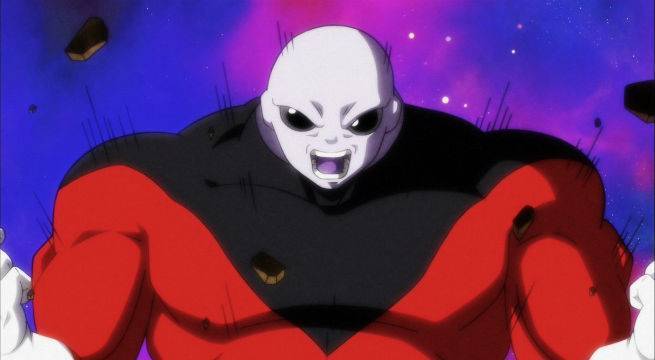 Please donate to my Ko-fi to help my website: https://ko-fi.com/matthat

If Jiren was in Pokemon trainer, he would probably not have any dragon type Pokemon in his party or if he was in Yu-Gi-Oh!, he would be the one to destroy all of Kaiba’s Blue-Eyes White Dragons. If you don’t know what I am talking about, it’s about the recent English Dub episode of Dragon Ball Super on Toonami on Sept 7th. In episode 127 of Dragon Ball Super. Jiren is the last remaining fighter from Universe 11 and he takes on Universe 7 warriors (Goku. Vegeta, 17 and Frieza). Jiren easily dispatches everyone on his own and the god of destruction Belmond tells everyone the reason why Jiren is strong. He tells everyone that Jiren, as a child, lost his parents from an unknown powerful enemy. He was spared and he was raised by a martial artist who taught him and his students to fight. Unfortunately, the same enemy kills half of the students and even his master. Jiren tries to convince the survivors to work together and fight this enemy, but they all leave him. Back in the present, Jiren makes a comment about having the benefits of strength.

Depending on which language you prefer, Jiren’s response is different. In the original Japanese, Jiren states that having strength is important and having incredible strength will forgive everything including the past. However, in the English Dub provided by Funimation, Jiren gives a weird “DIO” speech about strength. He tells Android 17 about having strength and his opinion on the dragon from Super Dragon Balls. He comments that he doesn’t trust anyone including the dragon and all dragons. He thinks his strength will even go beyond time itself

The reason why I am writing about this is because I been seeing people these past couple of days making of Jiren and commenting on the awkward English Dub. In my opinion, as much as I prefer watching Dragon Ball in English, I did think it was kind of awkward. I felt like I was watching JoJo Bizarre Adventures: Stardust Crusaders. The voice of Jiren is Patrick Seitz, the same guy who voices Dio from JoJo and Franky from One Piece. Hearing this dialogue made me see Jiren as Dio instead.

What do you guys think about this dialogue? Time to include this text to your Dragon Ball Super memes folder.

Check out this video if you want to see more about this: