Better late than never. Forgive me for the late post. Just a precaution, this is just a rumor and claim that MIGHT be true. It may be false, but consider the following. Before you jump into conclusions, look at some of the information.

With this Vic Migogna controversy going on for about 9 months, this one act of accusation has caused a great division on the anime fans and even the voice actors. We have IStandWithVic fans who believe Vic Migogna is innocent and believe he was falsely accused for sexual harassment. KickVic fans believe that Vic is guilty and he has caused pain on his fans and friends. Currently, Vic is in trial against his former friends and coworkers voice actors Monica Rial, her fiancee and Jamie Marchi for accusing him for harassment.

I previously shared that Vic’s friend Chuck Huber released his official affidavit in regards to Funimation and the voice actors such as Sean Schemmel, Chris Sabat, Monica Rial and Jamie Marchi. In his affidavit, he mentioned that these four have negative opinions about Vic and even made fun of him behind his back.

Now, I did find some interesting news about the voice actor Chris Sabat. It’s not official and it is just accusations but based on the details given by Chuck, it could be credible. It is possible that the voice actor Chris Sabat is accused of sexual harassment. Revealed in Chuck’s affidavit in points 41 and 42, it is implied that voice actresses would have to be willing to have sex with their coworkers in order to keep their roles in anime.

41. When the Dragonball Kai was being recorded in 2007, I heard rumors that actresses had been recast at Funimation for refusing sexual advances by Funimation employees. I consider these rumors credible based on my experience working at Funimation and from direct messages received from a former DBZ cast member.

42. I also heard that actresses who participated in sex with Funimation/Okatron5000 employees were cast in roles. I consider these rumors credible based on my experience working at Funimation

It may sound far-fetched, but Chuck implies that Sabat was involved in this act considering he had prominent roles in Dragon Ball and he was mostly in charge in the English studio of Okatron5000.

In regards to sexual favors, in the next part of this post, it is also implied that former voice actress Stephanie Nadolny was fired from her voice acting job on Funimation all because she didn’t want to do any sexual favors. Stephanie Nadolny was the voice of kid Goku in Dragon Ball and Dragon Ball GT and she was also the voice of Gohan in Dragon Ball Z. According to a leaked Direct Message with her and a fan, she reveals some startling news about Sabat. 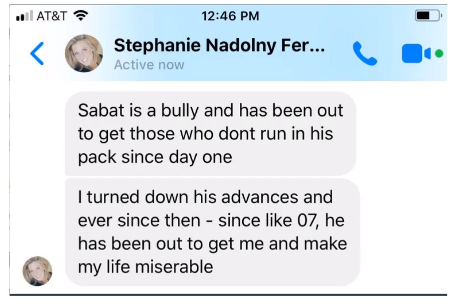 While digging it around, I found an interesting interview about Stephanie on Feb 11th 2019 from Maven Collectibles.

When asked about why was she replaced with Colleen Clinkenbeard in 2010, she tells the interviewer that it had something to do with an ex-boyfriend and how Funimation is operated as “a clique” (a small group of people who share same interest and spend time together but they don’t allow people to join in). Here is what Stephanie said:

Rosa: “Did you feel like there were any mistakes on your end that could have led to [your being let go]? Because you’re saying this was a rumor from another co-worker that told you and the company didn’t even tell you. So, was there anything that you could foresee that you felt that maybe it was a self-sabotage kind of thing that you did?”

Nadolny: “I think what it was, it’s really hard to prove these kinds of things too, but I had been seeing somebody romantically back from like 2003-2009 and when we split he absolutely, completely freaked out and his ego was effected and he said “I’m going to ruin your career!” So he called all my employers-”

Rosa: “And aired your business. Wow.”

Nadolny: “Yeah, aired my business or whatever. My personal life, some of it true, some of it wasn’t. And so, I think that’s what kind of led to me not being able to reprise my character, was that.”

Funimation as a clique

Rosa: “I don’t want to get into it if you don’t want to, and I respect that, it’s none of my business, but I was curious because it must have been some serious stuff for them to think that then.

Nadolny: “It’s like I said, it’s a clique. Some people run around with these people, some of these people have kids together now, and they play together, they go to the state fair together. It wasn’t on purpose, but over time, I kind of got pushed out of that whole clique. And I was trying to just be professional and make it about business, but there’s a lot of people, from what I understand just from making some appearances and things like that, that are still flat-out doing this, like “Hey these are my friends, I’m working with my friends.” I’m happy for them, but I completely feel like I was unfairly pushed out and that my personal life should have had no effect on not being able to come back. Because it really hurt, I had no idea what was going on. I was abused and threatened by this man and he said “I’m going to ruin your career!” and “I’m going to call everybody you ever worked for and just dog you out and brought you out.” So I think that’s why, if there’s any other reason, I guess they call that irreconcilable differences.”

News site Bounding Into Comics speculated that the ex-boyfriend could be Chris Sabat that dated Stephanie. There is no solid evidence proving it, but there is a lot of information could be possible. Sabat holds a lot of influence in Funimation due to the fact he holds many roles in Dragon Ball and he is a manger in the English Dub. Mentioned earlier in Chuck’s affidavit, it was possible claims that voice actors particpated in sex in order to keep the roles of the characters. Stephanie did mentioned that she even refused Sabat’s advances in the screenshot.

What did Chris Sabat say about?

So what did Chris Sabat have to say about this with this allegation floating around? He released a statement stating that he denied the claims of how voice actresses had to have sex in order to keep their roles. According to Anime News Network, here is what he said:

“The recent allegations of sexual misconduct at Funimation and OkraTron 5000 are deeply disturbing and completely without merit. These libelous statements are based on groundless rumors and are meant to defame me and my company. Never in my career spanning two decades did I ever witness or participate in such conduct.”

What now? With everything laid on the table it makes us really think of Funimation and the co-workers. According to Chuck Huber, he mentioned that some of the cast didn’t like Vic Migogna and insulted him by calling him a pedophile and making fun of his Christian faith. He mentioned that there are claims that voice actresses had to have sex with their co-workers to keep their roles. Stephanie revealed that she didn’t like Sabat because he was a bully and she had to refuse his advances could have been implying sex. She mentioned that Funimation was more like a clique where she felt left out of the group and a certain ex-boyfriend did everything he can to ruin her career. Chris Sabat is well known voice actor is who has great power in the company of Funimation and his co-workers. I don’t know what the future holds but with everything going with Vic’s case, this could really hurt Funimation and the other voice actors. These evidences is not 100% true but only spoken and pointed out by other voice actors. Like I said, consider the following.