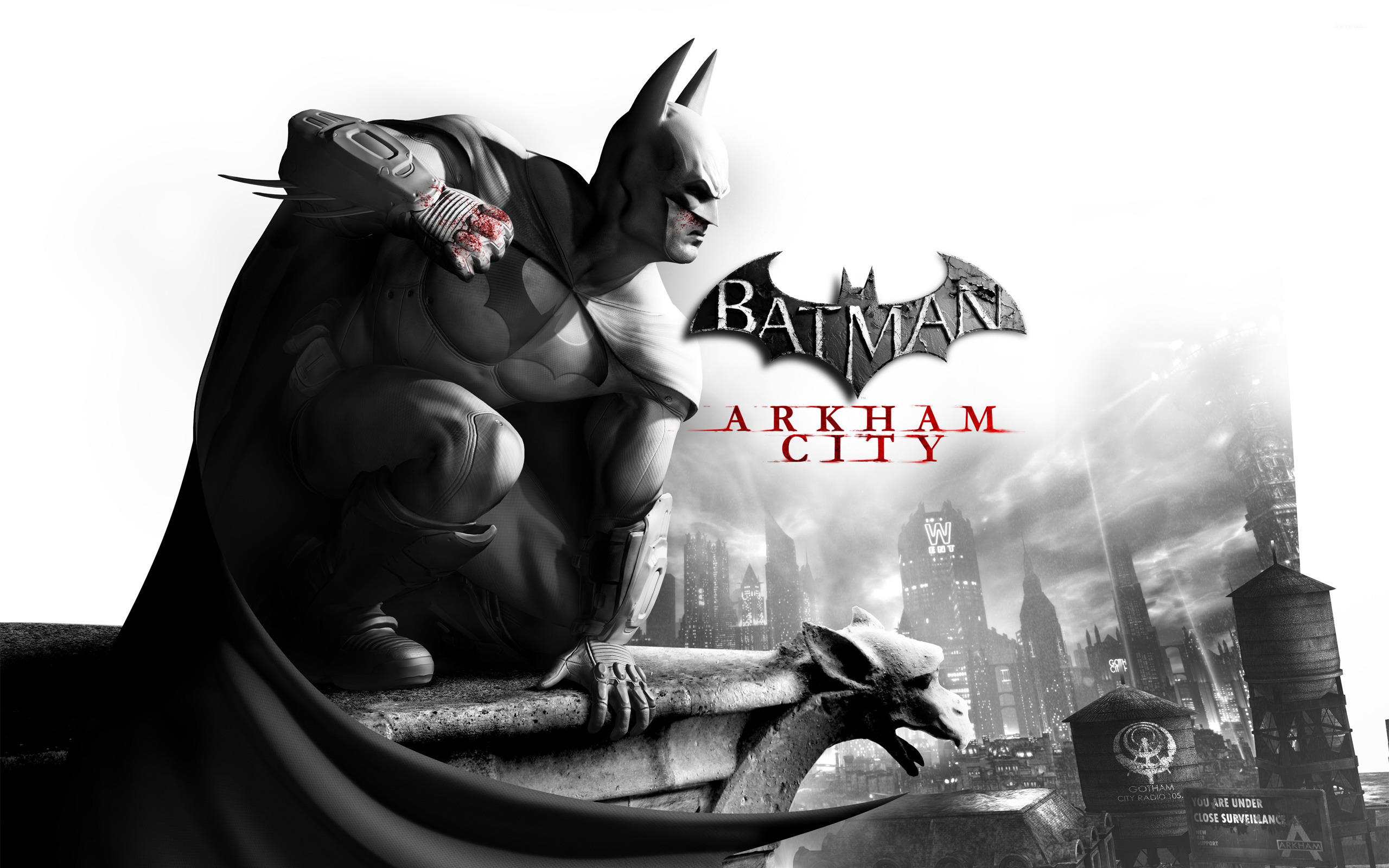 Batman: Arkham City sends players soaring into Arkham City – a heavily fortified sprawling district in the heart of Gotham City. Batman Arkham City introduces a brand-new story that draws together an all-star cast of classic characters and murderous villains from the Batman universe, as well as new and enhanced gameplay features.

Please donate to my Ko-fi: https://ko-fi.com/matthat

Part 2 of Return to Arkham

Check out Part 1 of my review of Return of Arkham where I talk about Arkham Asylum.

Batman Arkarm City was released in 2011 after the success of the first game, Arkham Asylum. Arkhame City later got a re-released as a Game of the Year Edition for PS3 and Xbox 360 which includes all the DLC such as being able to play Harley Quinn’s Revenge story, DLC challanges and even Nightwing and Robin. In 2012, the game was again re-released for the Nintendo Wii U called Batman Arkham City Armored Edition in which Wii U owners got access to an exclusive armor costume for Batman and Catwoman. In 2016, Rocksteady brought this game and Arkham City again in a double pack called Batman: Return to Arkham for PS4, X1 and Steam.

Story – Batman vs a city prison filled with evil

Taking place after the events of Arkham Asylum, asylum ward Quincy Sharp becomes the mayor of Gotham and buys a portion of the town and sends the inmates of Arkham and Blackgate prisoners to that purchased town and names it Arkham City. Arkham City is an isolated part of town in Gotham that is heavily secured and locked away from the citizens of Gotham; Arkham City is town dedicated to locking up prisoners. When Bruce Wayne gets involved and tries to convince Gotham that this is a bad idea, he gets kidnapped by TYGER Security led by Dr. Hugo Strange and he ends up getting up in Arkham City along with other political people who opposes the idea of Arkham City. While exploring Arkham City, Batman tries to discover what is Protocol 10 after getting captured by Strange. Batman not only has to find a way to escape Arkham City but also discover why did Mayor Quincy create Arkham City and how does Protocol 10 involve with all the inmates in the city.

Gameplay – No Batmoble, but fight like Batman even more!

Just like my review of Arkham Asylum, the gameplay of Batman is exactly the same but with some new features. Batman can still do the basic combat like fighting, counter, stun and dodge. In this game, Arkham City upgrades the combat with the ability to do quick combos with Batman’s tech. You can use combos like batarangs and even the new ice grenade to be part of the free form combat and rack up points. Batman even learns how to do new techniques in which makes disarm enemies easy. With enough combo points, Batman can disarm and break weapons or even do a series of powerful punches on heavily armed enemies. Unlike Arkham Asylum, Arkham City is an open world game where the player can freely explore the town and choose to either follow the story or do side quests. You can’t travel with the Batmoble but the grappling hook is essential to fast traveling and gliding through the town. Also making a game appearance, we have Catwoman who also becomes playable in the game. Unlike Batman, she doesn’t have a lot of gadgets to use except for caltrops and a whip; Catwoman is more mobile than Batman. While exploring the town, she can climb buildings and climb upside down. In the DLC, players can even play as Batman’s partners Robin (Tim Drake) and Nightwing. Robin and Nightwing can only be playable in the Riddler Revenge in which players tackle challenges in stealth and combat. Robin is also playable in the DLC story of Harley Quinn’s Revenge. Robin fights similar to Batman but he has some unique gagdets such as having a shield weapon in order to block bullets and Nightwing can use his stun batons to stun multiple enemies. Like mentioned before, Riddler Revenger challenge is a challenge mode where players can either play as Batman, Catwoman, Nightwing or Robin and take on challenges and earn medals.

Taking place shortly after Akrham City, Harley Quinn is filled with vengeance and blames Batman for the death of Joker. Harley kidnaps Gotham police officers and locks them up in the Steel Mill where Joker used to reside. Batman tries to save them but ends up getting captured as well leading to his disappearance. Barbara sends Robin to infiltrate Harley’s base and save Batman and the police. Without the Joker, Harley has nothing left to lose and is willing to go this far to kill anyone who wants to stop her revenge on Batman and Gotham.

Did Batman Arkham City exceeded Arkham Asylum? Was this re-release still great? In my opinion, even after playing this game from the PS3 era and even recently playing this game on my PS4, Batman Arkham City is one of the best superhero games out there. Before we had Marvel’s Spider-Man PS4, we had this game and this game showed us what is like to be a superhero like Batman. One of the major improvements of Arkham City is allowing players to freely explore part of Gotham and fight crime like Batman. The story of Batman feels both like a combination of the comic books, the animated series and even a movie. The voices for Batman and Joker is once again Kevin Conroy and Mark Hamill and with the DLC, you can play as Batman in different skins such as Animated Series, Batman Beyond and even comic book skins like The Dark Knight Returns. The story is one big roller coaster of plot twists and every moment makes it hard to put down the controller. The characters on this game has greatly improved. What was mentioned or even used as an Easter Egg, Arkham City gives us more characters for Batman to fight against. Characters like Two-Face, Penguin, Ra’s al Ghul and Mr. Freeze finally gets the chance to fight against Batman. Besides Batman, Catwoman was another fun character to play with in this game. Traveling may be tricky with her since she doesn’t glide and she has to rely on climbing, but combat with her is fun and seeing the character relationship with her Batman is eyecandy for Batman x Catwoman fans. I do want to bring up that the background music is so good! One of my favorite BGM is the song “I Think You Should Do As He Says”; The songs makes it feel like I am in a Dark Knight film. The DLC in this game adds more fun and gives the player something to do if playing as Batman wasn’t enough. Playing as different characters and taking on challenges really tests your skills and makes you think like a vigilante. While Harley Quinn’s story is rather short, it is still fun to see what happened after the events of the main story and how it affected people like Batman and Harley. I really like how even though some villains wasn’t able to be part of the main story, you could still take them down as side missions. Characters like Riddler, Hush and even Deadshot makes crime fighting even fun.

As much as I love this game, there are some cons to point out, but surprisingly, it is not enough to take away the fun of this game. Even though this version of the game includes all the DLC, Return to Arkham doesn’t include the Armored suits from the Wii U version of the game Batman: Arkham City Armored Edition. Basically, if you happened to buy all the DLC from the standard Arkham City from the PS3/X360 or even bought the Game of the Year edition, you’re not missing much. To add on to this, if you already played this game before in the previous console, the story is nothing new. This is only minor but I wish the characters besides Batman got a little bit more costumes to play with. Catwoman and Robin only has the three costumes while Nightwing has two. In side missions involving Riddler, there is a lot of backtracking in which only either Batman or Catwoman can only grab Riddler trophies. It’s rewarding when you collect every single trophy, but if you really hated collecting them in Arkham Asylum, be prepared to spend hours on collecting them in a big city. Besides the trophies, scan challenges returns where Batman has to scan objects to solve riddles and Riddler also added physical challenges where Bats and Catwoman has to do some challenges like gliding far or even climbing. Overall, Riddler missions are very tedious. I also wish we got more insight of Batman in Harley Quinn’s Revenge. Barbara mentioned that Bruce hasn’t been the same since Joker and Talia died. I wish we got interaction with Bruce with his friends in regards to that moment.

So, does Batman Arkham City still holds its title for being the best superhero video game? In my opinion, even after playing both copies, I still believe this is one of the best action games. Batman: Arkham City took whatever they had in Arkham Asylum and expanded it with a new story and features. The story goes beyond with with comic book and realistic elements that makes you feel like you are part of the comic books and movies. The voices for the characters is so amazing and it feels like watching either an episode of Batman: The Animated Series or a Batman DC animated movie. If you played the previous game, the gameplay is pretty easy to learn and it makes fighting fun; the stealth in this game was also fun. The DLC in this game does its best to make replay this game again with new content such as playing an epilogue chapter focusing on Harley Quinn and playing heroes besides Batman. The Riddler Revenge challenges really tests you in combat and makes you think you’re Batman. However, this game isn’t really new if you already played the classic game in previous generation console. Even with the DLC in this game, you still can’t get access to the Wii U contents of the armor suits. This game is good nonetheless and it even inspired other games such as Warner Bros title Batman: Arkham Origins and 2018’s Marvel Spider-Man. What do you guys think about Batman: Arkham City?