In the month of October, we will be exploring the world of fantasy in pop culture. The genre of fantasy focuses on telling stories about our external and internal environments. There are many ways we can interpret the word, fantasy. For example, we can talk about how a fantastical place could glorify what reality should be or the dangers of ideal expectations. Fantasy could also be seen as taking a “wild journey” or a “hallucination” and how that can affect our psyche and well-being. Fantasy can also focus on our personal dreams and expectations and how those expectations do not align with our reality. Overall, our posts will reflect on how we view the fantasy genre and what we can learn about these pop culture mediums.

Don’t forget to donate to my website at Ko-Fi:

Dreams can be reality

I got this quote from this Kingdom Hearts III trailer from 2017. This quote has been in my head for a while and made me think about dreams and realities.  Whenever I think about dreams, I don’t usually think about dreams as visions while sleeping, I think of dreams of ideas that appear in our heads whether you are sleeping or awake. Whether you are sleeping or daydreaming, we all have ideas we wish that can be reality. Some of these dreams can be personal. We might have dreams of wanting to find love, succeed in life or other self desires. No matter what anyone says, if you can dream it, it could happen, you shouldn’t give up. If Super Smash Bros could get give us characters like Cloud, Joker or even Banjo Kazooie, anything is possible. It took years for characters like Spider-Man, Black Panther and Dr. Strange to show up in the same universe and in the same movie. All this takes is an idea and with determination, that idea can make dreams into reality for the millions.

Please be sure to check out Megan Peoples (Nerd Rambles) blog post.

Kingdom Hearts: A boy seeking escape from an island

Kingdom Hearts tells the story of young boy named Sora, who lived in an island with his friends Riku and Kairi.  These three friends wants to leave Destiny Island and explore the world. Meanwhile at Disney Castle, Donald and Goofy finds out that King Mickey has left and went out to stop a powerful darkness who wants to bring destruction to the worlds. In order to find the King, Donald and Goofy seek out someone with “key” who can lock up the darkness. Back at the island, as Sora prepares to leave with his friends, his island gets attacked by shadow creatures called the Heartless. When he see Kairi disappear and his friend Riku sink into darkness, Sora unintentionally summons a powerful weapon called the keyblade and he uses it to fight off the invaders. Unfortunately, he ends up losing his world and ending up in a world called Traverse Town where he later teams up with Donald and Goofy. Together, all three must conquer the darkness and save their friends.

This is just synopsis of the first Kingdom Hearts game. As the game progresses, the story becomes expanded and Sora will eventually become an important piece to an upcoming war. As the story goes on, Sora and his friends would get involved with a war destined to happen in which light and darkness will clash and see which one is powerful. Constructed by the stories’ main antagonist Xehanort, he plans to seek Kingdom Hearts and bring all worlds to darkness.

Kingdom Hearts: Your powerful weapon is your heart

What can we learn about a video game which features Disney and Final Fantasy characters and a kid with a big keyblade? I have two points we can learn from Kingdom Hearts.

A Crossover made possible! 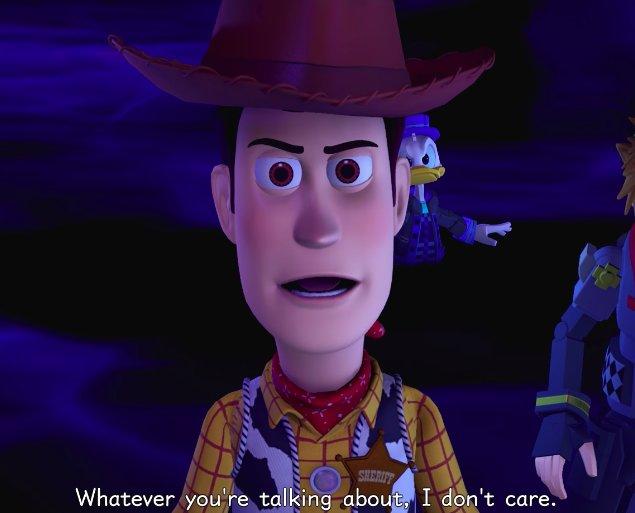 When talking about Kingdom Hearts to other people, I just simply describe it as a game featuring Final Fantasy and Disney working together to fight against an evil force. The idea of combing two different franchises into one game like this may not odd considering we have crossover games that does it such Marvel vs Capcom, but the idea of a powerful animation corporation like Disney and teaming up with a Japanese game company who specializes in RPG games is truly an odd dream. Kingdom Hearts is one of the only games where you’ll see Hades hire Cloud Strife to kill Hercules or see the toy Woody roasts a villain who has power of the darkness. As weird as it sounds, it actually does pretty well if you look at it a different perspective. Square Enix is well-known for doing fantasy stories like Final Fantasy and mixing in themes like good vs evil and having characters go through life changing experiences that make them grow as a character. Disney also holds some magic that contributes Kingdom Hearts with themes like friendship and in the same way as Square in good vs evil. In good vs evil, the Disney elements allows us to fight the evil we saw in Disney animation films growing up and Square offers the ability of fighting evil in a world combined with fantasy and realism. Kingdom Hearts allows us to not only fight with our childhood heroes, but we also learn what it means to get strong and learn about the world.

We learn that the world is made of light and darkness 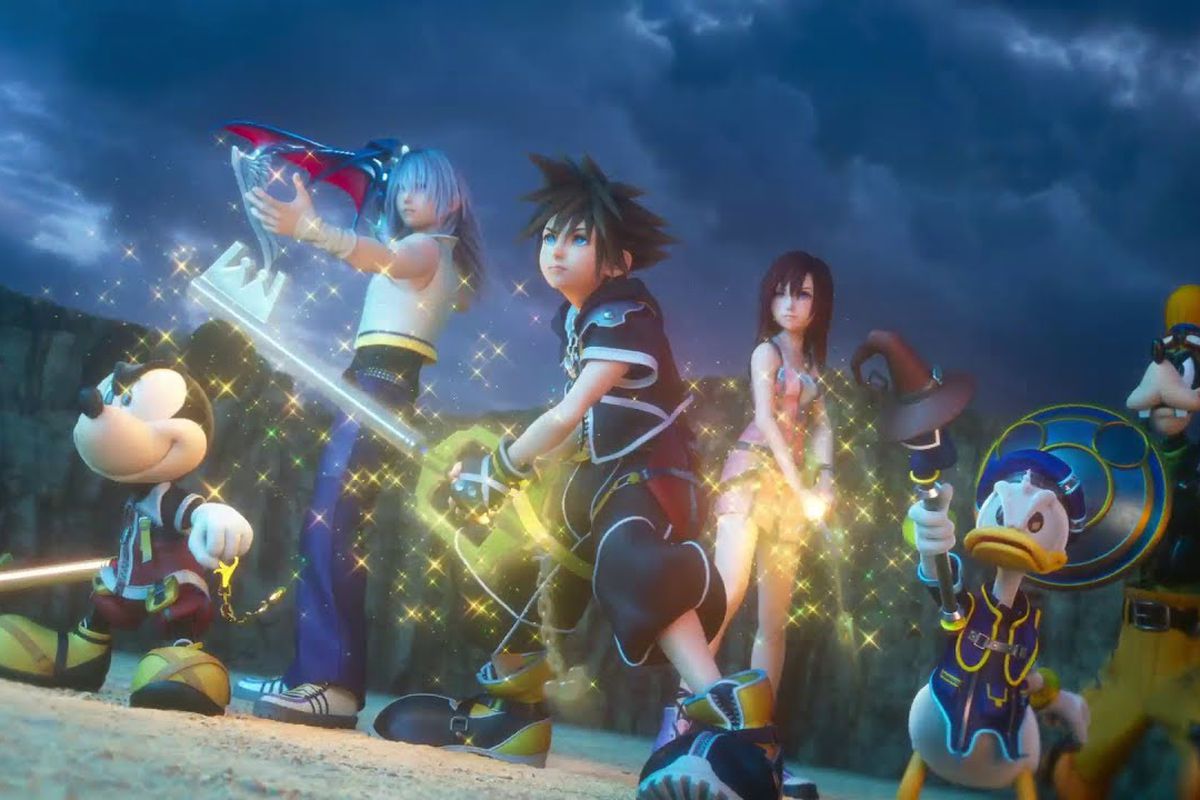 It might be the most used cliche of all time, but it can also be true even today. We live in a world where people either shine bright and do their best to make the world a better place or they hide in the darkness and seek their own volition. You see this a lot in media where the good guys side with good and evil chooses darkness in order to seek destruction for their goals. Kingdom Hearts, there is a lot of light and darkness themes that we can learn. As usual, the characters you meet are with either light bearers or seekers of darkness. Characters like Sora and his friends seek to rid the darkness and bring peace and harmony. The antagonists in the game wants darkness to rule the worlds believing that everything was born into darkness and darkness is fueled by every emotion in a heart such as joy, sadness, and anger. While playing this game, I learned that Kingdom Hearts was more than a typical light vs darkness fight, but rather a long history between the two and how it was actually a war that never ended. When Sora first started his adventures, he thought things was going to be easy locking up darkness. However, as the story progresses, Sora learned that fighting the darkness with brute force was going to require some growing up and taking on emotional challenges. Sora had to deal with fighting his closest friend, losing his memories and even losing someone he cared about. With everything that has happened to Sora, how does he still hold the will press on? He has his friends and they help light up his heart. Sora has his friends who no matter what and under circumstances will stand by him. Even in the darkest times, finding the right friends will help you find the light of the darkness and seek peace.

When you look at Kingdom Hearts, you may think it’s just a game where Disney and Final Fantasy come together to fight evil. You are correct in that observation. Kingdom Hearts is a really unique game where two different franchises come together and create an epic story. It sounds like a crazy dream coming to life, but yet that idea became a success. If you have any ideas you want to do, but you also fear that someone will it’s impossible to execute, just remember that Kingdom Hearts is a real game and it takes courage to turn this fantasy into reality. When looking at Kingdom Hearts as a whole, the fantasy story can help motivate you when facing something impossible. If Sora can explore worlds and fight something filled with negative emotions, you too can face the world and be the light of the world. Instead of living life like an island and being separated from the world, the world is meant to be explored. Find friends that will keep you up on your feet and tackle challenges together.