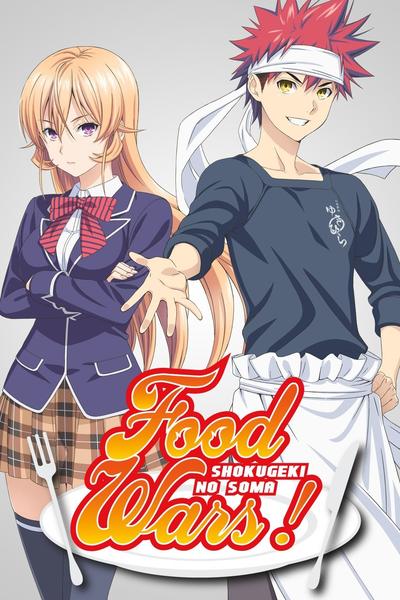 Ever since he was little, Soma Yukihira’s main goals have been to beat his father in a cooking contest and take over the family diner. That’s why, when his dad suddenly announces that he’s shutting the restaurant down and sending Soma to cooking school, Soma is shocked. However, Totsuki Academy is no ordinary cooking school. This elite institution is filled with culinary giants like Erina “God Tongue” Nakiri, who does her best to keep a lowly short-order like Soma from even making it inside the door. However, if the snobs can dish it out, Soma can serve it up, and when he learns that only a handful of the students manage to graduate every year, he swears that the only way he’ll leave is as number one! Will he make the cut, or will his pot boil over in the first season of Food Wars!

I come up with a new recipeh!

Anime as a whole is one big universe for other subcategories. We have anime dedicated for certain people like mech lovers, sports fanatics and even for the superhero lovers. When it comes to anime, we are focused on most things such as characters and story plot. How about an anime all about food? Food is necessity to living and in anime, it sometimes serves an important role and it sometimes gets attention as much as the protagonist. Whether you are watching Ponyo and seeing the characters eat ham, or Goku munching down food from King Kai House or Luffy stuffing his mouth with meat, food is a universal key component in anime. In anime like Toriko, food is used for fighting and for hunting. When you mix cooking and a slice of life anime, you get Food Wars. There is no superhumans, aliens or robots in Food Wars except for humans who can cook up a dish that is phenomenal. If you are a cook, this an anime that might strike your interest if you are thinking about trying a new recipe. If you are a foodie like me, you can sit down and appreciate the taste of perfectly made food. After sitting down and watching season one of Food Wars, I am will be discussing my thoughts for this anime and let you know if it’s worth the time.

Story – Going to a cooking school with a 99.8% chance of getting expelled

The story begins with a young teen named Soma Yukihira who lives and works with his dad at a family restaurant. Soma and his father gets into these cooking competitions to see who is the better cook; unfortunately for Soma, his father always wins. When asked about Soma’s future, Soma wants to stay and take over the family business. In surprising turn of events, his father decides to shut down the restaurant work overseas for other restaurants. He also sends Soma to a private cooking academy Totsuki Academy in order to test his skills and learn something new. Soma agrees to go and not knowing the danger of the school in attempt to learn and defeat his father one day. However, even in the first day, Soma quickly learns that Totsuki Academy is not a simple school for the weak-minded. Totsuki Academy is a private school with high percentage of getting students expelled and the classes are taught by expert cooks from all over the world. As Soma takes these classes, he must learn to use whatever he has in order to survive along with other classmates who has a goal to be greatest cooks.

We follow the main character named Soma Yukihira who comes from a family business. Despite his appearance, Soma has an unique way of crafting dishes that can make the elitist chefs eat his dust. Early in the episodes, he does meet one of the high rank cooks and coordinator named Erina “God Tongue” Nakiri. Erina is a teenager like Soma who is also the headmaster of Totsuki Academy and grand-daughter to former headmaster. Erina has a sensitive tongue that allows her to pinpoint a person’s flaws in cooking and she is cold-hearted when she judges. She also despises Soma because of his food is really good and her pride won’t let her complement his “commoner’s” dishes. As Soma meets the other students, he meets classmates such as the shy farm girl Megumi Tadokoro, the meat expert Ikumi Mito and even the Japanese-Italian brothers Takumi Aldini and Isami Aldini. With these friend and foes, Soma will be tested and he will have to use everything in his arsenal to please the experts.

Review – An anime that Gordon Ramsey will love… or hate!

For an anime that talks about food with a hint of ecchi, Food Wars was an enjoyable anime. I don’t cook, but I do love to eat food and I had moments where I was hungry just by looking at the food. I really like Soma and his attitude towards the people that looks down on him. Soma reminds me of Shonen Jump characters like Asta from Black Clover and Naruto due to his ability to disprove others just because of his cooking background. The things he crafts is pretty amazing and I like how the anime goes in depth on how food works. In the anime, Soma entices me with the details on handling food and how to make the customers want more based on display. If you are cook, you should definitely pay attention how food is prepared and how it can be used to sell. If you are an eater, you will get hungry no doubt about that. I did like some of the characters such as Megumi because of her shy personality. Unlike Soma, she doesn’t have a strong backbone and she is easily scared but whenever she wants to be like Soma, she is willing to step and get the courage to cook. Overall, there are some characters in this anime either serves as a comedy relief or some that appears interesting. Near the end of the season, we do get to some interesting characters that can rival Soma, but it is only brief. In pacing, this anime felt just right; it didn’t go too fast nor too slow. The anime is pretty easy to follow in the story and once you see the cooks cooking, you would probably be ready to click on to the next episode.

In regards to any negatives, the only thing I can say that some may not like besides getting hungry would be the ecchi scenes. To those who don’t know, ecchi is a Japanese term which is used in anime that uses content like anything suggestive such as characters wearing lewd-like clothing or having dialogue suggesting nudity or sex. Anime like High School DxD is an example of an ecchi anime since it involves girls wearing revealing clothing and how situations appear revealing skin and having characters implying sex. In Food Wars, there is no sex but the characters to experience an exaggeration of foodgasm. Whenever Soma cooks food, the characters get aroused through the smells of the dish. Once the characters try his food, they experience and sensation that is over the top just like JoJo’s Bizarre Adventures. Not literal, but when the characters gets these foodgasms, they envision themselves stripping because of the ecstasy and pleasure of good food. Overall, this anime’s ecchi content uses foodgasms for the content and over the top stripping is what makes Food Wars an ecchi anime. I wouldn’t recommend watching this anime with people around.

For only being the first season, did Food Wars had a good start? In my opinion, yes. Food Wars has a simple plot that is easy to follow and the main theme about food and cooking can appeal to cooks and food fans. Soma is a cool character to cheer for and his ways of using basic skills to compete is intriguing. When the spotlight isn’t focused on Soma, it’s nice to see a change of pace and see how the others perform in their culinary skills. Like I mentioned before, the anime is easy to follow and the pacing is just right. The story moves right along quite well and the episodes do leave you wanting more. Speaking of episodes, if you do watch the anime, don’t skip the credits because after the credits, the anime does show an after credits scene that leads on and gives you a hint to what to expect. The only thing that might be a complain is the foodgasm moments. The anime is ecchi and if you are sensitive to the idea of hearing people getting aroused or having imaginations of stripping, this may not be your choice in anime. If you can manage the fanservice in this anime, this anime is actually not that bad. I wouldn’t watch in a empty stomach.

Did you watch this anime? What did you think of it? Comment down below.