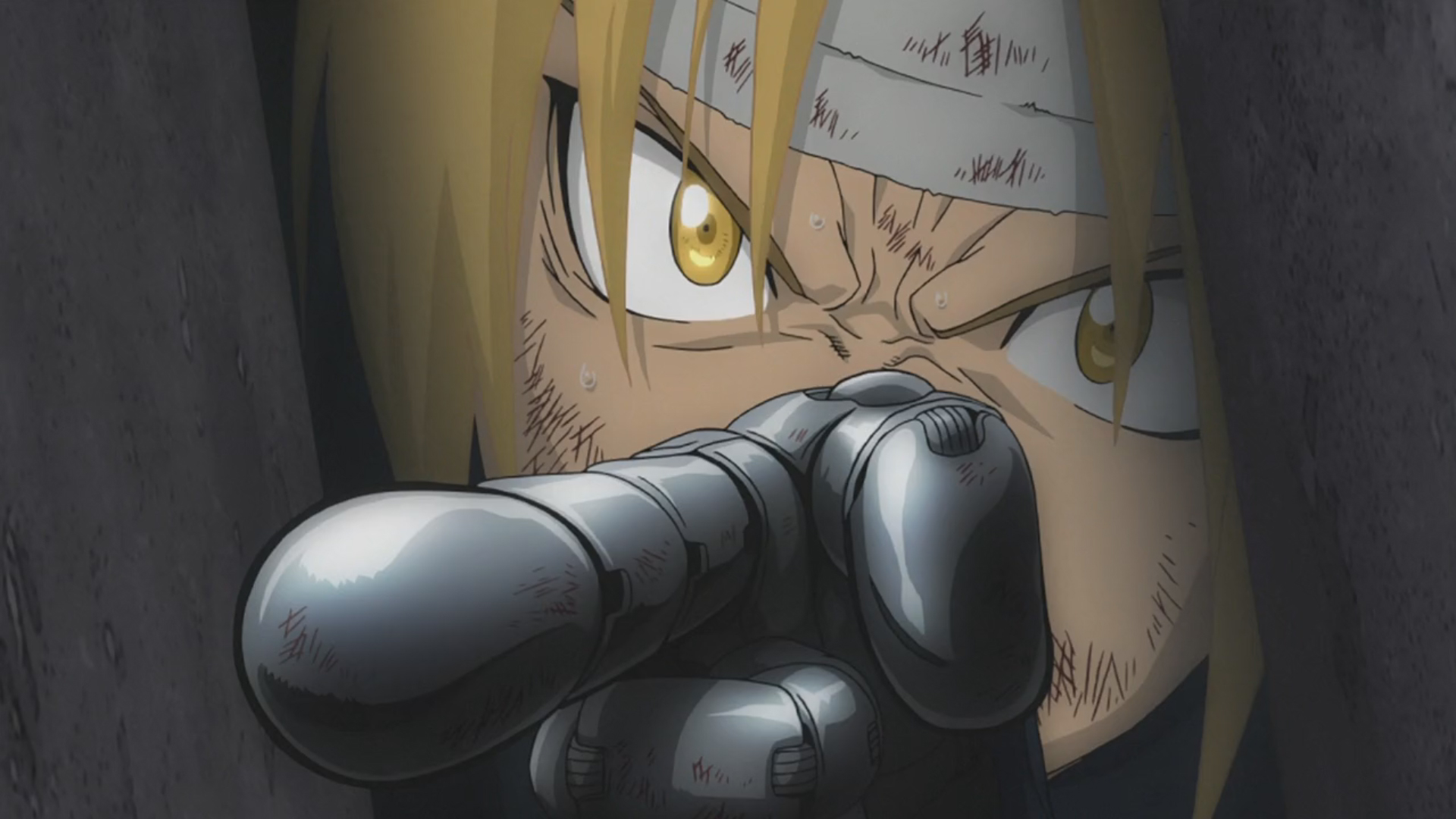 It has been a whole year since the controversy in regards to Vic Mignogna with Funimation and Rooster Teeth. Last year, what could been a good year for anime fans with the success of Dragon Ball Super Broly and the anticipation to RWBY volume 7, voice actor Vic Mignogna was fired from both these companies due to being accused of harassing his fans. According the allegations, Vic harassed his fans by hugging and kissing without consent and to make matters worse, his friends from Funimation has turned against him and state he is a creep. Because of this controversy, there has been a split with fans in the community; the ones that believes in Vic’s innocence is part of the IStandWithVic group and the one group that believes he’s not innocent is KickVic. In my past posts, I mentioned before that this controversy had shed some light in regards to Funimation’s skeleton closet such as Chuck Huber’s affidavit revealing some dark rumors about Vic’s so called “friends” and a possibility that Chris Sabat could be the cause of Stephanie Nadolny’s voice career. In case you didn’t know, Vic tried to take this allegation to court and go against Funimation as well deal with his accusers such as Monica Ria and Jamie Marchi, but unfortunately, it failed on his part and he lost the case. In recent trial news, Vic later appealed the case and he got the seal of approval and it is too late to dismiss it.

Despite the news, Vic Mignogna has been busy trying to participate in cons and trying to stay positive online and through livestreams for his fans. However, in livestream from January 23rd, he decides to speak up and defend himself. In the livestream he calls out people who has accused him and telling his fans that his “friends” from Funimation has lied to him. In a emotional statement, he tells his fans to not engage the haters and don’t get involved if it means risking themselves for suffering.

“I have never once in the history of my life forced myself on anyone. …I’ve never hurt anyone & I never would. Anyone who thinks differently doesn’t know me at all. Anyone who claims differently is a liar.”https://t.co/kfFpsH6pRK

During the livestream, he points out the people that have wronged him and they were the ones that wanted to hurt Vic. He mentions Sean Schemmel, Chris Sabat, Monica Rial, Jamie Marchi, Kara Edwards and DC Douglas. Interesting enough, he specifically detailed the voice actors and their interaction with him.

Vic mentioned that during the premiere of the Dragon Ball Super movie, Sean stated that he should not share his faith and Sean has been open about hating him. Sean is an exception to being a fake friend because he has shown he does not like Vic.

Vic mentions about Jamie and tells everyone that Vic had no attraction to her and he always considered her as a friend. In the past, Vic thought she was a good friend based on fun experiences such as going to conventions together and how they always have fun time teasing and goofing off. The playing and teasing in which was described was Vic playing with Jamie (in her story, Vic pulled her hair and harassed her) However, Vic points out that one week before the controversy started, while Vic was still working at Funimation, Jamie appeared friendly and even asked how was his Christmas. Here is what she said:

Jamie: “Hi Hun! How was your Christmas?” *in a happy tone. this was one week before the controversy in 2019.

Vic considered Monica a dear friend. During the investigation of the controversy, Vic considered asking Monica for help and try to find out what to do during this troubling time. He thought of her as a close friend and even before the new year, Vic enjoyed the fun time with her during the Broly movie premiere. Before she wrote her story about the allegations, Vic wrote out a private message to her. In this message, he asked her what did he do to make her feel this way and he apologized for any misunderstanding. Vic went through the trouble to ask Monica what did he do to cause all this and Monica DID NOT respond back. It was revealed later Monica instead used the apology messages against Vic when he was in court.

According to Kara affidavit, Vic assaulted her and this made feel traumatized at work. However! Vic points out during the livestream that if Kara was traumatized, why did she get upset when she couldn’t sit next to him while signing autographs? Also, if she was still hurt from Vic, why did she wanted to go out and eat with Vic at A-Kon. Why did she try to audition in Star Trek Continues (Vic is also an actor in Star Trek Continues)? These are the three questions Vic brings up in regards to Kara. If Kara was traumatized about Vic, she wouldn’t want to be near him. Was she actually lying or was she just making sure to keep things in appearance for the fans?

Vic’s friend are disgusted in regards to these fake friends

In the later half of the video, Vic tells us that he still has some friends that are working in Funimation and without giving out names, his friends are disgusted to these known fake friends. His friends have witness there actions and behavior and they saw the fake friendship and saw the actions in which was the beginning of the controversy.

Usually, I would say what is your opinion on this video and how do you feel about Vic and the other voice actors. Instead, I won’t force you to comment since I don’t want to bring in any heated debate. I don’t care if you are a ISWV or a KV, let’s not bring any heated dispute. With an exception with Sean, these are the voice actors who pretended to be friends with Vic.

Great news One Piece fans! If you already now, One Piece Pirate Warriors 4 is about to be come a fun and hectic game with this news. Announced yesterday, One Piece Pirate Warriors 4 has upgraded the online gameplay which allow not just two players be part of a mission but now four players can work together. Revealed in the trailer down below, you can play up to four players online and work together and tackle online missions. One of the missions shown below is a four player battle with one giant boss. This game will be out on March 27th. 2020 for PS4, XB1, Switch and PC. The game story will go all the way up to the Wano Country arc.

Online co-op is coming to ONE PIECE Pirate Warriors 4! Recruit friends to form your crew of up to 4 players to take on thousands of enemies.#OPPW4 is coming to PlayStation 4, Xbox One, Nintendo Switch, and PC on March 27th, 2020. Pre-order today: https://t.co/FtkmLmN25Y pic.twitter.com/09RECi6Bmb

Greetings anime and manga fans! I bring you news for those who have Netflix or is a One Piece fan. It has been revealed by IGN and Crunchyroll that a live-action One Piece series is in production and it will be in Netflix. According to sources, the first season will have up to 10 episodes and the live-action series will be oversees by One Piece creator Eiichiro Oda. Steven Maeda, who worked on Lost and The X-Files, will be the show’s showrunner and executive producer. Matt Owens, who worked on Marvel’s Agents of S.H.I.E.L.D. and Luke Cage, will be the writer and executive producer at Netflix and Tomorrow’s Studio, while Netflix handles the physical production.

Here is a translated note made by Oda himself about the project: 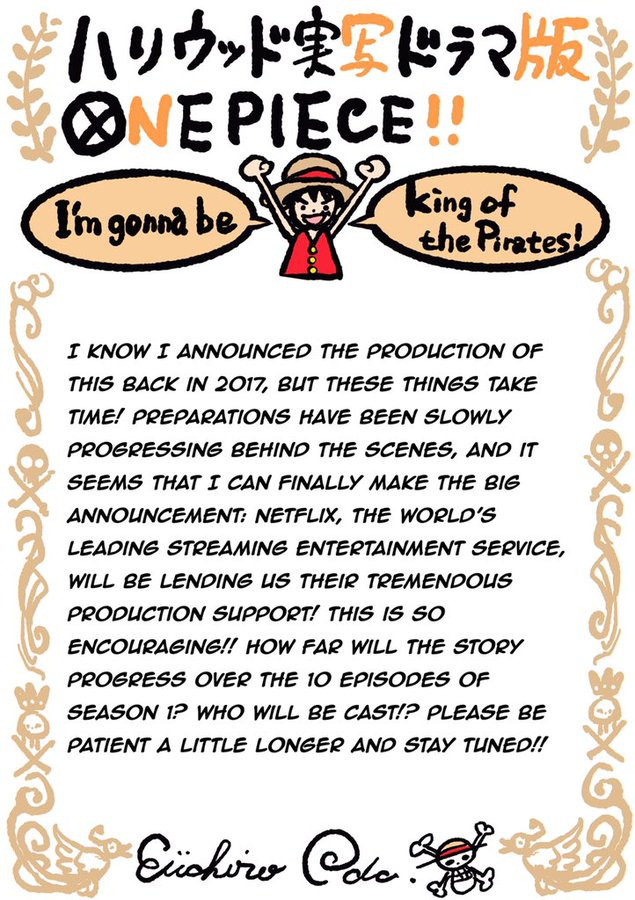 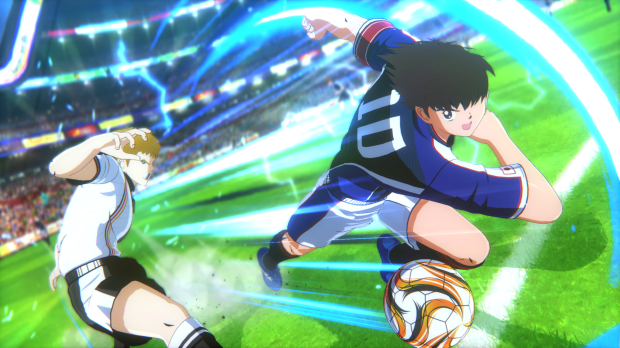 Sorry for the late news; better late than never. One-Punch Man isn’t the only new anime game that is coming out. Bandai Namco made an announcement of a brand new anime video game featuring Yōichi Takahashi sports manga Captain Tsubasa. Captain Tsubasa is a Shonen Jump sports manga that focuses on soccer (or football in some places) and it made its debut in manga in 1981. Bandai Namco announced that they will be making a video game based on the manga and the game will be called Captain Tsubasa: Rise of New Champions. The game will be released in 2020 for PS4, Switch and PC.

Friends. Rivals. Competition. Get ready to hit the field with CAPTAIN TSUBASA: Rise of New Champions! Arriving in 2020. pic.twitter.com/xT3ayJurv3

Listen up team! Today we have a special announcement from Yoichi Takahashi, manga artist and creator of Captain Tsubasa. pic.twitter.com/6JliBViOQg

So far, the game will have a story mode, a versus mode and an online versus mode.

Multiple gameplay modes include:
⚽ Story Modes
🆚 Versus
🌐 Online Versus