Here we go again for another fun and exciting post where I share with you my Pop collection. As a fan of Funko Pops, it’s my duty to hunt and collect the rare items for my collection. April is a shorter month than March, but I was able to snag some rarity via purchases. Whether they were online or in person, I will take what I want. Check it out! 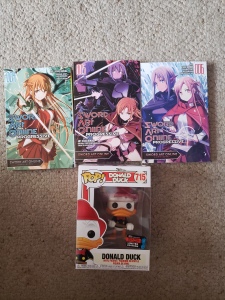 Besides Mickey Mouse, I also like Donald Duck. I got this Donald figure from a Barnes and Noble purchase from online shopping. I wanted to get this exclusive Disney figure along with trying to collect the Sword Art Online Progressive manga. I don’t know what episode/short is this Donald is from, but he looks cute in his firefighter gear. I am huge fan of Disney and I couldn’t resist this duck.

From another exclusive, I got these items from Hot Topic. I bought myself a Sonic the Hedgehog water bottle filled with Sonic stickers and the DC character Deathstroke Pop figure. Deathstroke is one of my favorite DC villains. He may look like Deadpool, but Deathstroke is no laughing joke. This guy is equipped with a deadly arsenal and healing factor and he is incredible skilled in fighting that could be compared to Batman. Slade Wilson is a force to be reckoned with.

98. Battle-Scarred Kong from Godzilla vs Kong 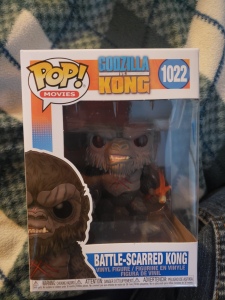 Based on March’s 2021 film, Funko created Pop figures based on the recent monster brawl movie Godzilla vs Kong. I saw this movie on HBO Max and I enjoyed every minute of it. Seeing the powerful monsters Godzilla and King Kong duke it out was pure fanservice. I bought this figure on my dates at Barnes and Noble. I was shopping with my girlfriend and I saw this Kong figure along with other Pop figures in a little section. I didn’t find Godzilla, but I find this version of Kong. This Kong has fresh battle scars on his chest and a piece of a broken crane.

On the same date where I bought Kong from Barnes and Noble, I went shopping at GameStop. GameStop was having a buy two and get one free Pop Funko sale for Pro Day. I bought these two Pokemon figures and I got the Flash figure from the CW show The Flash. I don’t have the Flash since I gave it to my sister who is a huge fan of the show. I did keep these two Pokemon. These two Pokemon are from the Kanto region. Ponyta is a fire type Pokemon and Raichu is electric and the evolved form version of Pikachu.

I officially have 100 figures!