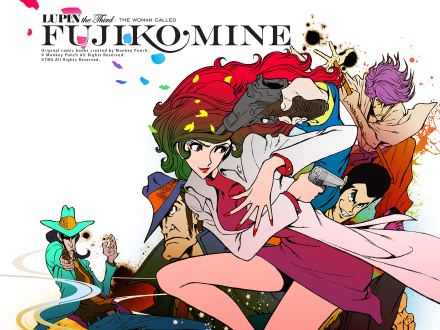 She’s a thief. A killer. A saint and a scandal. She’s whatever you need her to be to get the job done. After sizing you up with one sinful glance, she disarms you with a touch. You’re powerless to resist. She’s walking seduction, with an insatiable itch for the priceless and a fetish for mischief. She takes your breath away to get what she wants. She takes everything else just because she can. And when she finally meets the master thief known as Lupin, will this be a star-crossed rivalry or a bloody betrayal? It’s all in a night’s work for the woman called Fujiko Mine.

Lupin the 3rd after midnight

Lupin the Third (sometimes called Lupin III in the manga and also written as Lupin the 3rd and Lupin the IIIrd) is a classic series that has a respectable fanbase from the 60s to the present. Created by manga creator Monkey Punch, Lupin the Third started off as a manga and then later spawned into many anime projects such as anime TV series, OVA, TV Specials and movies. Even in his passing, his legacy still continues. While most fans recognize the series a comedical, action cat and mouse series, veteran fans knows about Lupin’s manga origin. According to some, the original Lupin III manga was more than gags and hilarious adventures; in fact, Lupin III was more dark for the adult readers and the story had some sensual themes. Most Lupin anime did have some sensuality thanks to the prominent character Fujiko Mine, one of the main cast of the Lupin anime, but most anime included her for fanservice moments for a brief moment before getting to the main plot. However, in 2012, anime director Sayo Yamamoto took the helm and directed the anime series called Lupin the Third: The Woman Called Fujiko Mine. Not only her, but others such as Shinichiro Watanabe and Takeshi Koike was involved with the anime. Yamamoto was same anime director who worked titles such as Yuri!!! on Ice and Michiko and Hatchin. Watanabe directed the anime Cowboy Bebop and Samurai Champloo, but he was the anime music producer. Koike was the animation director and character designer for the anime. Koike would also be the director of Lupin III anime films taking place after A Woman Called Fujiko Mine. He created the films such as Jigen’s Gravestone, Geomon’s Blood Spray and Fujiko’s Lies. Together, these people help create a dark and mature Lupin anime.

Plot: A story about a beautiful, seductive thief

The anime focuses on the character Fujiko Mine (voiced by Michelle Ruff), a woman who uses her feminine charm and wiles to get her way and steal priceless treasure. Her life of stealing changes when she comes across the notorious Arsene Lupin III (voiced by Sonny Strait). With this encounter, Fujiko meet her match against another thief and Lupin vows to one day claim this Fujiko for himself. Along the way, Fujiko would later meet other characters from the main series such as the gunslinger Jigen Daisuke (voiced by Chris Sabat) and the samurai Geomon Ishikawa XIII. Also appearing in Fujiko’s path of thieving, she meets the head of the police named Koichi Zenigata (voiced Richard Epcar) who would try and stop her from stealing or even have a mutual teamwork in undercover missions. In a world filled with ancient treasures, Fujiko hopes to steal what she can using her skills on stealing and seducing anyone who stands in her way. However, a tough women like Fujiko has some secrets of herself that might test even Lupin’s skills.

Review: A Lupin anime made for adults – Beautiful, Dark and Tempting

If you can get past the anime’s intro song, you can get through the rest of the anime. Right out the bat, this Lupin III anime is definitely not family friendly. Just like most Lupin III anime, the anime starts off slow in the first half which allows viewers meet the characters and get to know them. With Fujiko being the main character, viewers will learn about her and her interactions with the other characters. There is thirteen episodes in this anime and the plot doesn’t take action until we get to around episode 7 or 8. The first half takes a steady pace for introduction while the other half focuses on story and intense themes. I like the idea of having Fujiko be the main character and having the anime take a mature path. This anime can play around and go beyond the limits on content wise and this allows the animators to replicate the dark tones based on the original manga. The voice acting was surprisingly well done. Originally, the anime was owned by Funimation, but the contract to the anime expired and then later Discotek would later re-release this anime under their brand. Sonny Strait as Lupin was a surprising fit and matches the goofy nature of Lupin and captures his intellectual mind. If you are a fan of Funimation’s English Dub, you’ll definitely enjoy this anime’s dub and recognize the voice actors. Animation wise, this anime plays around with a gritty atmosphere and psychedelic moments as we go through the eyes of Fujiko. The imagery makes this anime feel like you’re watching a psychological, erotic thriller movie where the main character like Fujiko is constantly facing the odds in order to satisfy herself but while remaining a mystery.

Conclusion: A Steal or a Bust?

Would I recommend Lupin the Third: A Woman Called Fujiko Mine? I would say yes, but no to some. Yes because if you like Lupin anime, but with a mature twist, go check this out. The themes, music and imagery are cranked up for the mature audiences. If you been memorized by Fujiko Mine in Lupin anime, you’re going to wish she can have her way you in this anime. English Dub is good and if you like Funimation, you’ll enjoy the cast of the characters. This anime feels like a homage to Monkey Punch’s manga where the Lupin franchise can go back to the adult story telling. However, I also wouldn’t recommend it, if you don’t like extreme sensuality themes. Not only in the anime, the intro song doesn’t hold back on Fujiko’s skin and her seductive character. While this anime is praised for the themes of mystery and sensuality, if you don’t care about themes of nudity and sex, this isn’t for you. I enjoyed this anime and I would later check out more of the serious films. In case if you didn’t know, this anime would do so well that a spinoff sequel movie series would be produced later. Taking the helm, character designer Takeshi Koike would create three movie series focusing on Jigen, Geomon and Fujiko. It’s unknown at the moment if there is any plans of a solo movie focusing on Zenigata or Lupin. A Woman Called Fujiko Mine is an exciting ride

2 thoughts on “Anime (Spoiler-Free) Review: Lupin the Third: The Woman Called Fujiko Mine”