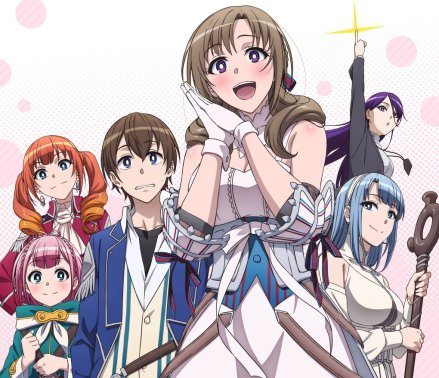 Masato Oosuki’s dream has just come true: he’s been transported into the world of a video game. But for some reason, his doting mother, Mamako, has come along with him?! A whole new style of fantasy comedy, where your mom tags along on your heroic adventures!

Mother knows best… hold her hands in your adventure

Isekai is an interesting subgenre in anime. Whenever you think of isekai anime, you think of anime like Sword Art Online, Konosuba or Overlord. Some characters die and reincarnate in a fantasy world for a second chance in life or some ends up getting trapped in a virtual world like video games. In this anime I am about to review, this isekai will have the gamer protagonist enter a video game world… with his mother.

Do You Love Your Mom and Her Two-Hit Multi-Target Attacks? is an anime based on the light novel series created by Dachima Inaka and art done by Pochi Iida; due to its long name, it’s also referred to as Okaa-san Online according to Wikipedia. The series was printed at launched in 2017 and ended in 2020 consisting of 11 volumes. The books would get licensed by YenPress and it would get a manga adaptation and Aniplex of America would license the anime. Studio J. C. Staff would animate the anime and the anime consists of 12 episodes with an OVA episode. So far, there is no plans for a season 2 or a movie. There is no English Dub for the anime at the moment.

The anime begins with Masato Oosuki wanting to escape his life and experience an adventure in gaming. After getting invited to a brand new game, Masato disappears into the game until suddenly, his mother, Mamako Oousuki, also appears in the game. One of the distributor named Masumi Shirase informs Masato and Mamako that this new game is supposed to bring and build a healthy relationship with mothers and child. Masato becomes devastated when he learns that his dream of having a video game adventure is crushed when he has to share thee adventure with his doting, affectionate mother. To make matters worse for him, his mother becomes the most powerful in the game due to her having a lot of love for her child. It’s up to Masato to team up with his mom and beat the game and learn how to better bond with his parent. Along the way, Masato and Mamako will meet other gamers who arrived in the game and each having their own reasons.

Review: Mothers I love to have in an adventure

What do I think about this anime? Honestly, it’s not too bad, but it’s also not the greatest. I will admit, Okaa-san Online introduces an interesting twist for an isekai series. Rather than having the story deal with something series like Sword Art Online or The Rising of a Shield Hero, it decides to be funny play a lighter tone of entering a fantasy world without involving death. Similar to the series Konosuba, Okaa-san Online relies on the comedic troupe involving gag moments from the characters and occasionally using fanservice. I thought the characters was funny in their own way. I like the contrast between Masato being the serious and trying to be the cool character and bringing him together with his mother, Mamako, who is compassionate, supporting and very simple minded. We also have the supporting characters like Porta who is known for being cute in the group and the one who can supply the team; Wise who likes to brag about her magic attacks even though she becomes useless from counter attacks, and Medhi who appears very gentle, but deep down has harsh comments towards everyone under her breath. Each character has an interesting quirk which makes them different and entertaining. The pacing of the plot is slow, but as you watch the anime, it does have some interesting themes and by the time you get done with the anime, you might be curious. I won’t go in details on the plot, but it makes you wonder on the purpose of the game and how does the rest of the children feel about having to adventure with their moms.

Despite the simple story, the anime isn’t grand compared to other isekai anime. Like mention, it does feel like it tries to be like Konosuba. The main cast has different qualities which could be similar to Konosuba. Another factor I been hearing from people is the relationship with Masato and Mamako. Despite the anime trying to show the love between mother and son, some viewers see these two playing with the theme of incest. Some people criticized that Mamako, despite being a mother of a teenager, looks way too young and is usually close with him. The anime does play fanservice and the girls, including Mamako, gets all in it. Some people might be turn off by that since it is different and not everyone is close to their mother. In my opinion, I saw this anime like it was a Simpson episode involving Bart and Marge Simpson. The main characters is a young kid who is annoyed by their mother in a world where he feels belong and we have a mom with no gaming skills, but joins in just so she can be part of his life.

Is Okaa-san Online worth watching? It depends. If you like fun adventures without the dark and gritty plot, you might want to check it out. This anime is pretty odd. If you like fanservice with having mothers being the enter of attention, you might enjoy. The characters are fun to watch and they do try to be funny. If you like a funny adventure series like Konosuba, give this one a shot. The pacing in this anime is pretty slow and as you get near the end of this show, it does make you curious on what’s going to happen to Masato and Mamako. The anime likes to play around with the theme motherly love and it sort of gives you the idea what and how does a mother feel towards their kids. In spite of the pros and cons, Do You Love Your Mom and Her Two-Hit Multi-Target Attacks? is a wacky, fun-loving series. It is not the best isekai series, but it’s not even the worse either. If you plan to watch it, just relax and enjoy the random adventure. Sometimes a mother’s love is the most powerful thing to have in both real world and video game world.

What do you think about this anime?

3 thoughts on “Anime Spoiler-Free Review: Do You Love Your Mom and Her Two-Hit Multi-Target Attacks?”