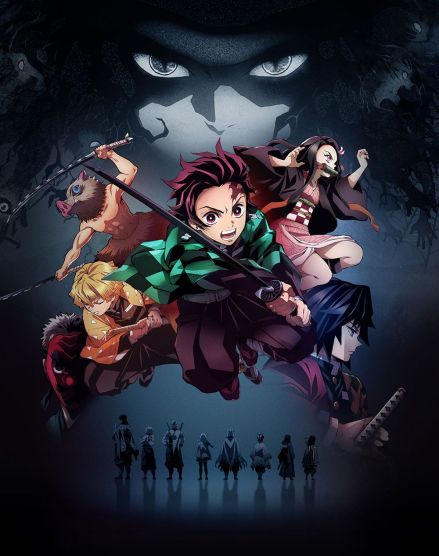 It is the Taisho Period in Japan. Tanjiro, a kindhearted boy who sells charcoal for a living, finds his family slaughtered by a demon. To make matters worse, his younger sister Nezuko, the sole survivor, has been transformed into a demon herself. Though devastated by this grim reality, Tanjiro resolves to become a demon slayer so that he can turn his sister back into a human, and kill the demon that massacred his family. A sorrowful tale of siblings in which the fates of humans and demons intertwine…begins now!

Demon Slayer: Kimetsu No Yaiba is a series based on the manga series created by Koyoharu Gotouge. The manga ran up to 23 volumes starting February 15, 2016 and ending on May 18, 2020. The series would later get an anime adaptation in September 2019 which had the first season consist of twenty-six episodes and the series was produced by Ufotable. Ufotable is an anime studio company responsible for making other anime such as Fate/Zero and Fate/stay night: Unlimited Blade Works. Demon Slayer would also get a movie adaptation called Demon Slayer: Kimetsu No Yaiba – The Movie: Mugen Train which debuted on October 2020. Currently, the anime continued onto the story in season with the TV series version the “Mugen Train” and the “Entertainment Arc”. For this review, I’m only to cover the first season of the anime, all twenty-six episodes.

Story: A brother and his demon sister

Taking place in the Taishō Period (1912-1926), the story begins like any other day for the young man Tanjiro Kamado. Tanjiro spends his time selling charcoal and help take of his family. One night as he goes out to town to sell, he returns home and sees his entire family slaughtered by an unknown demon. Out of the carnage, his sister Nezuko Kamado survives, but Tanjiro makes a shocking discovery about her sister: Nezuko becomes a demon. Faced against his own flesh, Tanjiro is saved by a mysterious swordsman named Giyū Tomioka. Giyū is a demon slayer, a swordsman who lives to protect humans and kill demons. Rather than lose another family member, Tanjiro seeks help to find the demon killed his family and help restore Nezuko’s humanity. Astonished by his actions and words, Giyū helps guide his path on his journey of becoming a demon slayer. As Tanjiro and Nezuko travel together in this scary adventure, Tanjiro will slay down any demons who wishes to harm humans and help cure his sister’s demonic transformation.

Review: An demon slaying story that will make you breathless

After finally seeing this anime the second time, I am ready to tell you what I think about this series. This anime has is amazing with its visuals, characters and music. Created by Ufotable, the anime shows off the gorgeous visuals on the landscape of the world and the character’s special attacks. For example, Tanjiro’s fighting abilities involves breathing deeply and visualizing his attacks and creates powerful slashing attacks. With every slash he performs, he creates an attack symbolizing a raging stream of water. The action sequence in the anime is quite intense and resembles anime such as Rurouni Kenshin and Bleach in regards to sword action. The characters in the series is what makes the anime an interesting ride when you get to know them. Tanjiro is a character who is brave and willing to do anything to protect his sister and other humans who needs help. When facing demons, despite having to fight them, he also senses the emotions of the demons before die in which the anime doesn’t hold back. Rather have some of the demons be there just for the plot, the anime takes the time to explore their past when they were human before they disappear. Along the way, we get to meet other characters that joins Tanjiro such as the cowardly Zenitsu and the battle crazed slayer Inosuke. Nezuko, despite not having much vocal lines, her actions does display her human side as she fight to control her demon side. There is violence in this Shonen Jump series, but it doesn’t go too gorey such other anime like Attack on Titan or Berserk; more like, the anime violence goes par with Inuyasha where violence is mild and the battle music intensifies with traditional Japanese music. The series main antagonist Muzan Kibutsuji is an interesting villain. Despite having minimal screen time in this season, this anime gives us a taste of his raw power and makes even the lower demons cower in fear.

Should you start Demon Slayer? Honestly, if you love titles like My Hero Academia, Fullmetal Alchemist: Brotherhood and Inuyasha, this is a series to get invested. Right off the bat, this anime starts off in a dark introduction to the plot, but as the story progresses, the anime goes back and forth with light and dark in the tone. The characters in the show makes watching the show a treat. The sheer determination of Tanjiro wanting to save his sister and seeing Nezuko wanting to protect Tanjiro and humans despite being a demon makes the story feel intense and leaving you want more for these two characters. The animation of this anime looks incredible and if you like Ufotable, I strongly recommend watching their works in which they did the Fate series. I watched this anime in English Dub and I just want to say, the dub cast is really good in my opinion. The pacing feels just right and this anime leaves little to no fillers; you will get the meaty story telling. If you finish the season, the next part of the anime is the Mugen Train arc in which you can either watch the movie or watch the TV anime series.

What do you think of this anime?