Howdy everyone! You know what this means when you see Funko. It’s time for another Funko Haul post. Without a doubt, this one of the biggest haul of the year so far. I bought myself some pops and some were given to me as birthday gifts. Lets go over my updated figures. 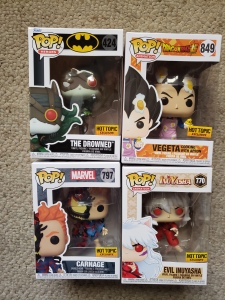 I got these four figures from Hot Topic online. These four are exclusives and once I saw them return to the site, I had to get them. The Drowned figure was the cheapest of the bunch. The Drowned is a dark alternate version of Batman from Earth -11. With the money and technology along with taking the throne of Aquawoman, Bryce Wayne becomes The Drowned. Now she and along with Dark Knights are ready to conquer the universe. Nothing really special with this one, but I bought this version of Carnage. I believe this figure is based on the moment where he escapes from jail. The Vegeta figure with the apron is based on the moment where he tried to cook eggs during Dragon Ball. Last but not least, I also got Evil Inuyasha. Sometimes called Demon Inuyasha, this Inuyasha, when under pressure, becomes a violent vicious demon. He becomes so dangerous he doesn’t need his blade and he is willing to attack his friends. 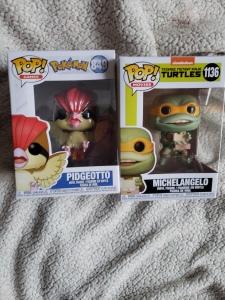 For my birthday, my girlfriend got me some pop figures. I got Pigeotto from the Pokemon series and this Michelangelo is from the movie Teenage Mutant Ninja Turtles II: The Secret of the Ooze. If you are a classic fan of Pokemon, you would know that Pigeotto was one of Ash’s first Pokemon when he started his journey. I haven’t seen this movie, but I would have assume there is a reason why Mikey is holding a box of donuts instead of pizza. Maybe I should watch it on my free time.

Got these guys again from Hot Topic, but with Hot Cash. I got this shiny and sparkly Mickey Mouse figure in his good suit with sorcerer’s hat and the malevolent Demongo. It is Disney World’s 50th anniversary and Disney is going all out on the celebration. Mickey is ready to party and fill the world with magic. From the animated series Samurai Jack, we have this deadly ally of Aku, Demongo. What makes him dangerous is the fact he can summon spirits and make them fight as long as he still standing. However, knowing Jack, he was able to find a weakness and inflict damage to this intimating dark magic user. 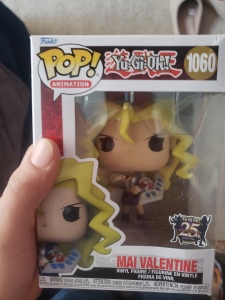 As a way to celebrate the 25th anniversary Funko released more Yu-Gi-Oh! Pops. I got Mai when I went to GameStop and I also bought Persona 5 Royal and Catherine for the Switch. She’s not an exclusive, but it’s cool to snag a character from a popular anime series. Mai is one tough duelist with her Harpie Ladies and her Amazonian women. 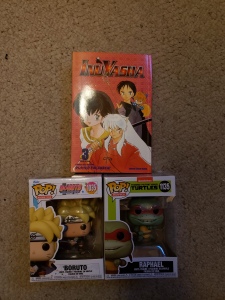 I got these two from going shopping at Barnes and Noble with my girlfriend. I got Boruto from the Boruto series and Raphael from the same movie with the one I got with Michelangelo. This Boruto looks different and if you remembered correctly, this Boruto appeared in the first few pages of the Boruto manga and the beginning of the anime. It’s unknown what happened, but Boruto is wearing the scratched headband from Sasuke, wielding a sword, has a scar on his eye and he is able to unleash his karma powers. This Raphael doesn’t have his sais but he is ready to kick butt. I also bought myself a VizBig Inuyasha manga book.

Last but not least, I got this t-shirt/figure combo set from my friend Ezra for my birthday. This is Majin Buu from the anime Dragon Ball Z. This pink blob monster is scary when angered, but if you give him ice-cream, he’ll be happy. Gotta love this pink character in which I think of him as Patrick Star.

That is all the figures I got from March. It was a big haul. I have a total of 148 figures. I hope you enjoyed seeing my collection. Cheers to 8 years of blogging! 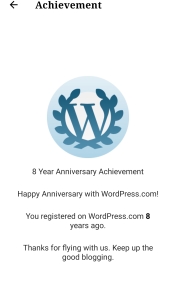