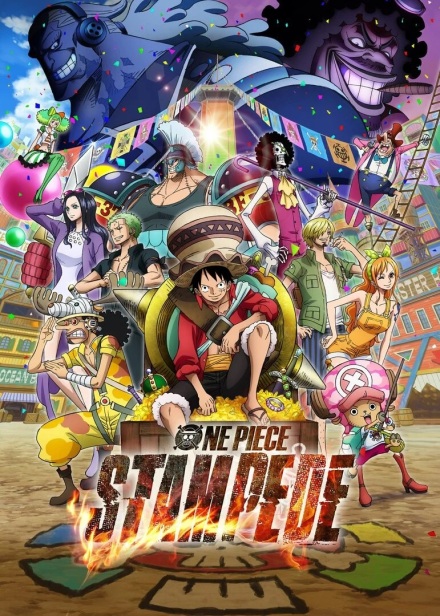 One Piece: Stampede is an anime film directed by Takashi Otsuka.

The world’s boldest buccaneers set sail for the great Pirate Festival, where the Straw Hats join a mad-dash race to find Gol D. Roger’s treasure. There’s just one little problem. An old member of Roger’s crew has a sinister score to settle. All bets are off when the most iconic pirates of One Piece history band together for a swashbuckling showdown, the likes of which have never been seen!

*Even though this review is spoiler-free, it may contain spoiler elements involving story and characters revolving the time of place parallel to the canonical story.

Happy 20 years to the anime!

One Piece Stampede is the 14th feature film of the series and this movie is commemorate 20 years since the anime’s official release. The movie was released in Japan in 2019. The movie was directed by Takashi Otsuka and One Piece creator Eiichiro Oda was the creative supervisor on the movie. Funimation would later dub and release the movie to an English Dub audience later in 2019 in the fall and winter season.

Story – A big party for pirates!

The anime movie begins with the Straw Hat crew attending to an island that welcomes all pirates in a big party event. Luffy and his friends are not the only ones crashing the party as pirates from the Worst Generation are also joining the fun. Luffy and the gang find out that there’s an event where if someone finds a special treasure chest, they will find a log pose from the Pirate King himself that will guide them to the One Piece. However, this party island is all set up by the ringleaders by Buena Festa and the muscle man Douglas Bullet. Festa is hosting this event in order to gather every single crew in one place and annihilate them with a buster call, a military’s heavy artillery attack so powerful it could wipeout an island from the map. When Luffy and the rest of the Worst Generation catches on the ruse, the come face to face with Douglas Bullet. Douglas Bullet was former crew member who served Gol D. Roger, the King of the Pirates. When a powerful pirate is too much for these pirates, it’s up to the power of the Warlords of the Sea and Revolutionary Army to help survive and escape from the military’s destruction.

For being the 14th movie and celebrating 20 years of the anime, is One Piece Stampede worth the watch? As a One Piece fan myself, yes! One Piece Stampede offers fans an incredible fanservice who enjoys action and a vast majority of One Piece characters. If you are a fan of One Piece characters, this movie brings in a whole party of memorable characters. From the Straw Hat crew, to Buggy, Hancock, Smoker and Rob Lucci, this movie invites everyone; hence the fanservice in this headline. The main meat of the movie is the characters and action. The story plot of the movie is quickly brought up in the movie and the rest of the story is told through action. Unlike the previous Film movies, this movie keeps all the characters in main location and all the events take place within it. This also means there is no build up and the antagonist immediately takes action. The film’s main antagonist is actually two which is Buena Festa and Douglas Bullet. I find these two pretty interesting because while Bullet is the main villain with the raw power and strength that motivates people to fight him, I also want to point out that I feel that Festa is the mastermind and the brains of the operation and purpose of the plot. While Bullet fights everyone, Festa is out hiding and preparing a massive restart to the pirate era. Going back to the action, the movie’s main focus is the main One Piece cast against this one powerful pirate. The English Dub was impressive as ever. The voice of Douglas Bullet is Damian Mills who is well known for voicing Frieza in Dragon Ball Super in the TV broadcast version and Kaworu Nagisa in the Evangelion movies (1.11, etc).

The movie sacrifices narrative story and build-up and gives us pure fanservice. Like mentioned, there is a lot of characters in this movie without a doubt, but only a handful is utilize for the sake of the plot. There are minor characters who appear on screen, but offer only for comedical purposes like the return of Wapol and Foxy. Even though we introduced to Bullet and we get a glimpse of his past involving Gol D. Roger, we don’t get much details about his life and his involvement in the crew. Like mentioned before, the movie sets itself up pretty simple without trying build up like Film Strong World or Z. Everything the story takes place is in one location and the characters jump right into the final fight with the antagonist. Unfortunately for some, while Vic Mignogna couldn’t return to voice Sabo, we did get Johnny Yong Bosch to take over and he does a pretty good job. Johnny Yong Bosch is well known for voicing Ichigo from Bleach and Vash from Tigun.

The best way I can describe One Piece Stampede is that this film feels like a Marvel Avengers movie. Whether you think of this has Infinity War or Endgame, the movie makes use of the fanservice and doesn’t hold back for the fans. This movie brings in majority cast of characters and throws them in one big grand battle royale. If you like a good One Piece action sequence, this movie is going to have it all and it’s going to take up 90% of the movie. Fans have speculated this movie will foreshadow the main story’s final fight and if that’s true, this movie might give us a taste of what to expect in the future of the main story. Don’t expect this movie to be like the other Film movie series like Strong World or Gold. The main purpose of the movie is to watch some pirates kick butt against a hardcore veteran pirate. I enjoyed all the epic moments in this movie and it really felt like the movie wanted to show off more characters besides Luffy. Overall, this movie is nothing but action and with dramatic sequences that makes you want to fight along with the pirates. Don’t expect a narrative build up on the setting of the story.

What do you think about this movie?