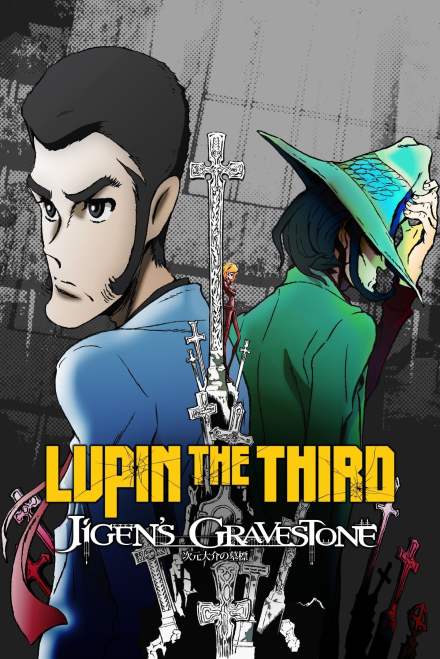 By bringing her voice to West Doroa, the East Doroan singer Queen Malta hoped that she could heal the rift between the two countries in Lupin the 3rd: Jigen’s Gravestone.

Instead, her murder on stage by an unknown assassin only served to increase the tension between the two countries. Already a country known for its incredibly low crime rate, East Doroa increases security in preparation for war–but security is nothing to the likes of super-genius thief Lupin III!

Still, when he and partner Jigen Daisuke swipe the Little Comet gemstone from an embassy in East Doroa, it’s a little convenient that the police seem to know their every move. And worse, before they can even make their getaway, the pair find themselves under the crosshairs of a certain hitman–the same one that killed Queen Malta! Something’s fishy, and in order to confirm his suspicions, Jigen visits the cemetery. There, he finds himself staring at his own gravestone. It’s a calling card of the sniper, Yael Okuzaki… and no one targeted by him has ever escaped the grave! But why is he only after Jigen, and not Lupin? And things only get more complicated with Fujiko around!

A while back in 2012, a Lupin the 3rd anime series called A Woman Called Fujiko Mine was created and released for Lupin fans. This version of the anime, unlike the rest of the TV series, was more mature and dark. The anime had noir and suggestive tone and the series had Fujiko Mine as the main focus. I did a spoiler-free review a while back if you are interested on the anime. Fans really enjoyed this so much that they wanted more of the darker and edgier side of Lupin. Taking over the direction of these Lupin stories we have the Takeshi Koike. Koike is well-known for designing the characters in Lupin the Third: A Woman Called Fujiko Mine and he directed the anime movie Redline. After the success of A Woman Called Fujiko Mine, he would direct and create three more Lupin the IIIrd anime movies focusing on Lupin’s party which featured Jigen, Geomon and Fujiko. This is where the movies would also change the title of Lupin’s name and it would be written as “Lupin the IIIrd”. According to sources, these movies are considered as spinoff sequels to A Woman Called Fujiko Mine. While these anime are set in a darker tone similar to the anime series, the movies are focused main on Lupin’s friends and we get to see their story and struggles. For this review, I am going to focus on the gunslinger himself, Jigen Daisuke.

Story: The best gunslinger versus his timed fate

Taking place in a stressful time where war could happen for both West and East Doroa, Lupin and his partner Jigen are on a mission to steal a priceless treasure called the “Little Comet”. The heist mission is stressful because the reason why there’s tension between the two countries is because the singer Queen Malta of East Doroa was killed in the West while trying to bring peace for both countries. A while back, Jigen was assigned to be Queen Malt’s bodyguard and help protect her as she tried to ease the tensions and prevent war. Unfortunately, Queen Malta gets killed on her performance by a hitman sniper and thus creates more tensions. Back to the present, Lupin and Jigen comes across the hitman face to face and he is already prepared to kill Jigen. The hitman is named Yael Okuzaki. What makes this man dangerous is that before he kills his target, he prepares a gravestone for the victim and rolls a die to determine how many shots will it take to kill the target. Yael’s mission to kill Jigen and it’s unknown who sent him for the mission. Along the way, Fujiko Mine is also in the story and trying to steal valuable items. Her goal of stealing is in a halt when she gets captured by an mysterious group who wants to be remain mystery and has hidden motives for the fate of the countries.

Review: Shots fired! One hit and the other misses

In my take on the darker side of the IIIrd Universe, I did enjoy the tone when I watched A Woman Called Fujiko Mine. Having Jigen as the spotlight was a nice change of pace. However, unlike focusing on Jigen’s back story like what they did with Fujiko, they wanted to focus on the character of Jigen and actually give him a challenge. In most anime, Jigen is that kind of guy who can take on any challenge that comes into his crossfire. In this movie, the creators wanted to give Jigen a struggle and show us if he can defeat another skilled sharpshooter. Even though Jigen is the focal point and his name is also in the title of the movie, we also get some Lupin screen time. The character interaction between these two is quite entertaining and familiar if you ever seen the anime series. The movie does retain some of the dark tones similar to the original manga and Fujiko anime. The plot is pretty basic at first and as the film reaches the climax, it does open up some interesting twists. What I really love in this movie is the English Dub cast. Instead of using TV voice cast the movie gives us some new voices in this mature world of Lupin. We have Keith Silverstein as Lupin (voiced Stark from Bleach and Hisoka from Hunter x Hunter), Dan Woren as Jigen (voiced Byakuya from Bleach), Christena Vee as Fujiko (voiced Darkness in Konosuba and surprisingly enough, she also voices Ami Enan in Part 5 of the TV series) and then we have Richard Epcar reprising as Zenigata (previously voiced him in A Woman Called Fujiko Mine and also voiced Jigen in the TV anime). Voicing Yael Okuzaki is Jamieson Price who is well-known for voicing Leonardo Da Vinci in Part 4 of the TV series and Chad from Bleach.

While this movie was entertaining, it does have some flaws that I couldn’t ignore. Despite being an hour long movie, I wanted to see more of Jigen. It’s cool that we got both Jigen and Lupin together, but I was expecting more on Jigen’s character considering since the movie’s title implies he is the main star. I was hoping it was going to be like the Fujiko anime. It doesn’t have to be a 24 episode long series, but I wouldn’t mind the movie taking the time to actually give us more of Jigen’s character. As mentioned before, Zenigata is in this movie, but he doesn’t serve a pivotal role, but rather as a teaser for the next story in Geomon’s Blood Spray movie. It’s nice to see him in this movie nonetheless, but I am also glad he wasn’t fully involved since he probably wouldn’t fit into the plot. I hear the most common complaint in this movie is Fujiko Mine and the way they treated her in the movie. Without spoiling too much on the plot, Fujiko in this movie was used for fanservice and to make use of the mature rating. In most previous works of anime, Fujiko is well-known for the sensual themes in the series and even her own anime did a good job on exploring the sexuality of her character. However, in her scenes in the movie, most people will argue that some of those scenes were unnecessary and took away the suspense involving Lupin and Geomon.

Inspired by A Woman Called Fujiko Mine, the darker side of Lupin the Third returns and this time, the story involves characters besides Lupin. Lupin has to share the spotlight with his partner in crime, Jigen and fight for survival. If you enjoyed the Fujiko anime, you’ll enjoy some action with Lupin and his friends. For an hour long movie, you get simple plot with some gun action with Jigen. It is a change pace knowing that some of characters got their roles reduced compared to other works, but it is nice if it means we get to see a character story on one major character. The English Dub and soundtrack is pretty good and fits with the characters. Like mentioned, it’s nothing too complicated in the story. The Fujiko screen time feels like a take way, but it does remind you that this isn’t TV series. Rather than having a comedical and serious story, it’s all serious and more suspense for the Lupin party. It would be nice to see more Jigen get the center role and see how he handles with life and death.

The next review I plan to do is the second movie Geomon’s Blood Spray. What did you think of the movie?