Better late than never I always say. Sorry Mallow. I got a bit preoccupied in life. I got tagged a while back and with things going hectic in my life, life kept me away from these writing projects. Anyway, let’s begin this tagged post!

Isekai is an interesting genre in anime. We all wish we could just run away and go to a new world leave behind our old life. In anime, it’s becoming a trend when the main character disappears from their world and reappears in an unknown land that could be something from fairy tail book or video game. However, the occurrence of an isekai plot can be unfortunate for the characters. Some die and reincarnate to another world and some become trapped in a world that is supposed to be paradise. In this post, I am going to choose my top four Isekai anime

4. Do You Love Your Mom and Her Two-Hit Multi-Target Attacks?

When it comes to Isekai anime, the most common thing about these titles is that they have a long title. Sometimes we don’t have time to type out every single word in the title and we resort to the shorten Japanese titles. However you like to call this anime, I like to call it Okaa-san Online. We all want to escape from reality and go on adventures like our RPG games like Final Fantasy, Pokemon or Dragon Quest. However, what if you entered the gaming world and your partner is your own mother? The young teen Masato thought he was going to have his own adventure and be the hero, but when he jumps into a game designated for mother and children, he didn’t know his mother, Mamako, was going to be joining him. As these two travel together, they come across with other gamers who came with their mothers and somehow wants to join them. It doesn’t help Masato when his mother is overbearing with her love and every time she shows affection, she ends up becoming the most powerful player in the game. Together, they’ll learn to work together and learn the true meaning of motherly love.

This was a weird, but fun anime to watch. It’s definitely not the best isekai anime, but when you bypass the funny gags and fanservice, you kind of see how important is love for a mother and her kid. Mamako really shows off the love and takes pride of being a mother. The novels are complete if you want to read them and as of now, there is only one season. This anime is pretty easy to follow. 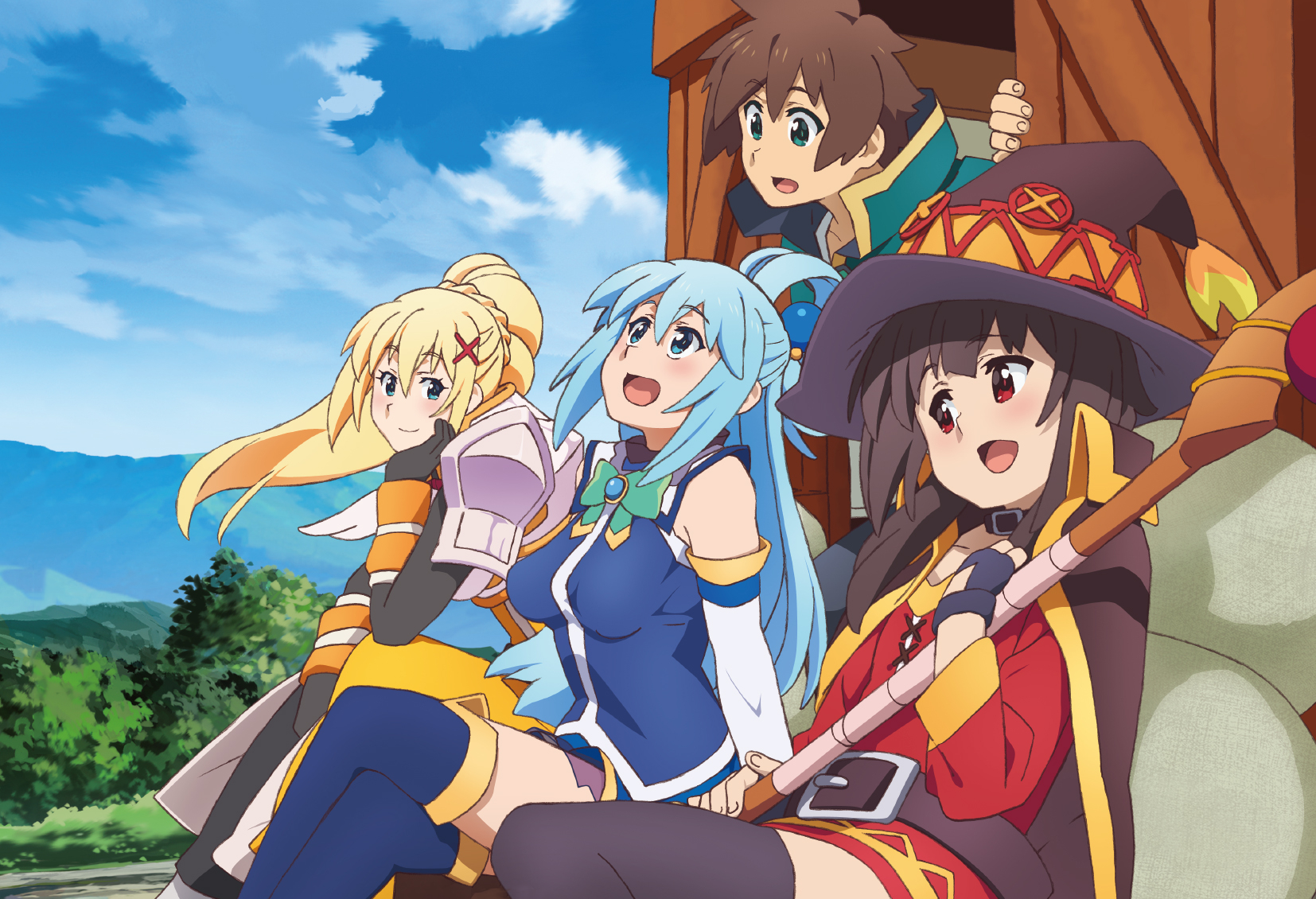 Again, another long title for this Isekai anime, but everyone already calls it by the shorter name. KonoSuba (or also called KonoSuba: God’s Blessing On This Wonderful World!) is a hilarious story in which if you thought things can’t get any worse, you should see this main protagonist and how he ended up in this situation. After dying in the most pathetic way, Kazuma gets the chance to be reincarnated and enter a fantasy world. The Goddesss Aqua mocks Kazuma him and gives him the chance for a new life. Feeling humiliated and degraded, Kazuma gets his revenge by bringing in Aqua to the fantasy world. However, he quickly learns that the goddess is nothing more than a pathetic crybaby who doesn’t have any powerful magic and prefers drinking. These two would later meet two powerful girls who have their own quirky personality. We have the explosive explosion loving mage, Megumin and we have the sadistic lust loving knight, Darkness. Together, all four in this party will take on missions and hopefully they don’t end up sleeping a haystack.

My friend got me into this series a while back and before we got an English Dub, I watched all episodes of season 1. I was laughing a lot and I felt bad for Kazuma. It’s one thing to die and get resurrected to a new world, but it sucks when you start off with little no income and your roommates drive you insane. I highly recommend this anime if you want a good laugh. 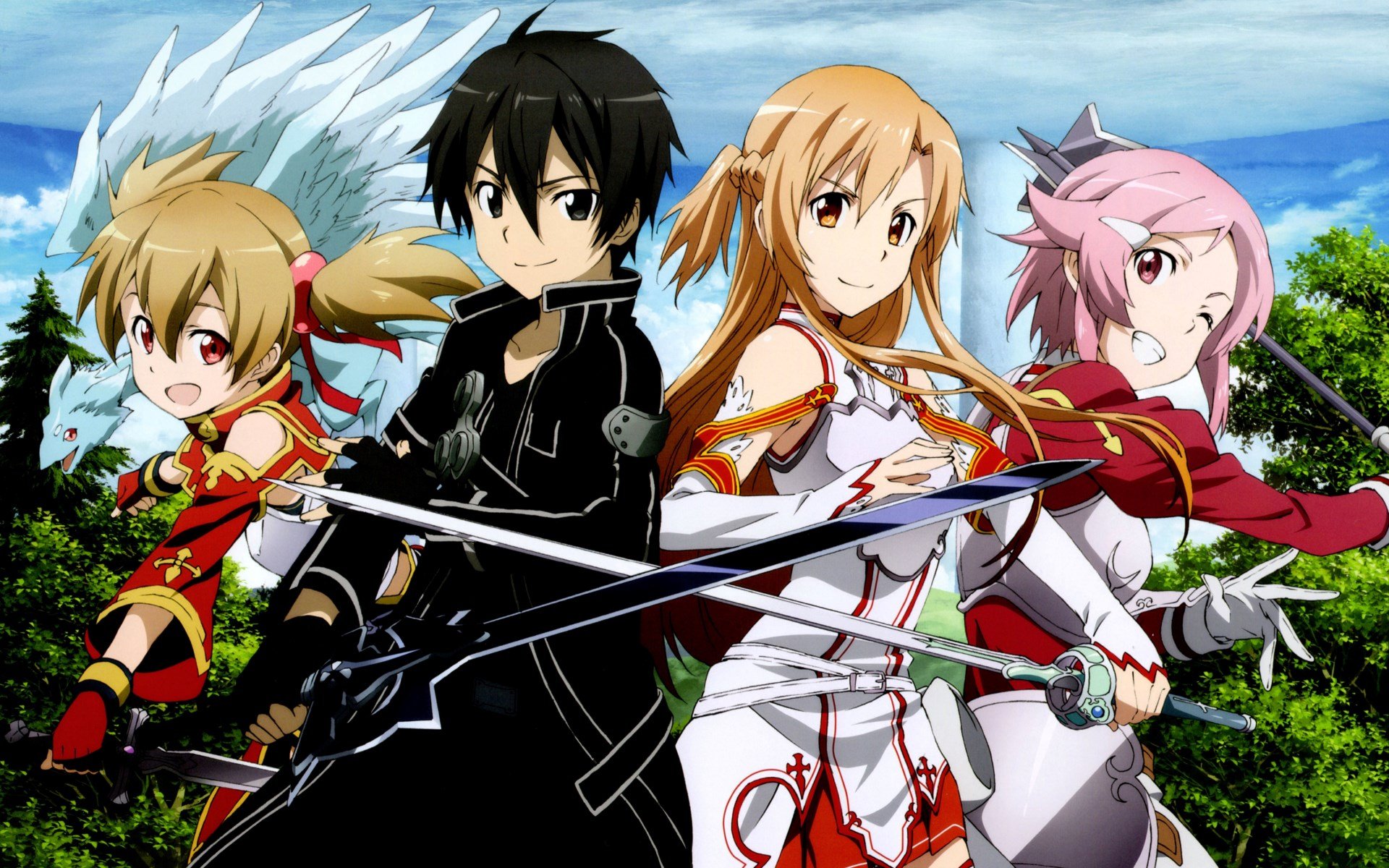 Love it or hate it, I love Sword Art Online. Sword Art Online has its ups and downs in the story and every story arc changes the atmosphere and tone. When you first start the series, the story begins with 10, 000 players who logs in to play the newly released VR game Sword Art Online. Things are taken to the worst when all of a sudden, players can’t log out of the system. The game’s creator Akihiko Kayaba makes a frightening announcement that he has disabled the log off button in the game and thus has trapped all 10,000 gamers. The only way to get out of this game is to beat the game on the final floor of the castle. The main character Kirito makes his goal to survive and get everyone out. However, he distances himself from parties to avoid bringing in danger to his friends and how some people don’t trust beta testers. Along the journey he does make many friends and he even gets married to a girl named Asuna. This is just the first act of the series. Sword Art Online has expanded and went on to many story arcs in which being trapped in a world isn’t too crucial, but that doesn’t mean the plot is not intense. Kirito has faced many challenges such as stopping a serial killer who uses a gun to kill both the in-game character and the player and even when his life was threatened and resorted to him being in a virtual fantasy world. We came a long way for Sword Art Online and despite the mixed reviews, it’s here to stay. 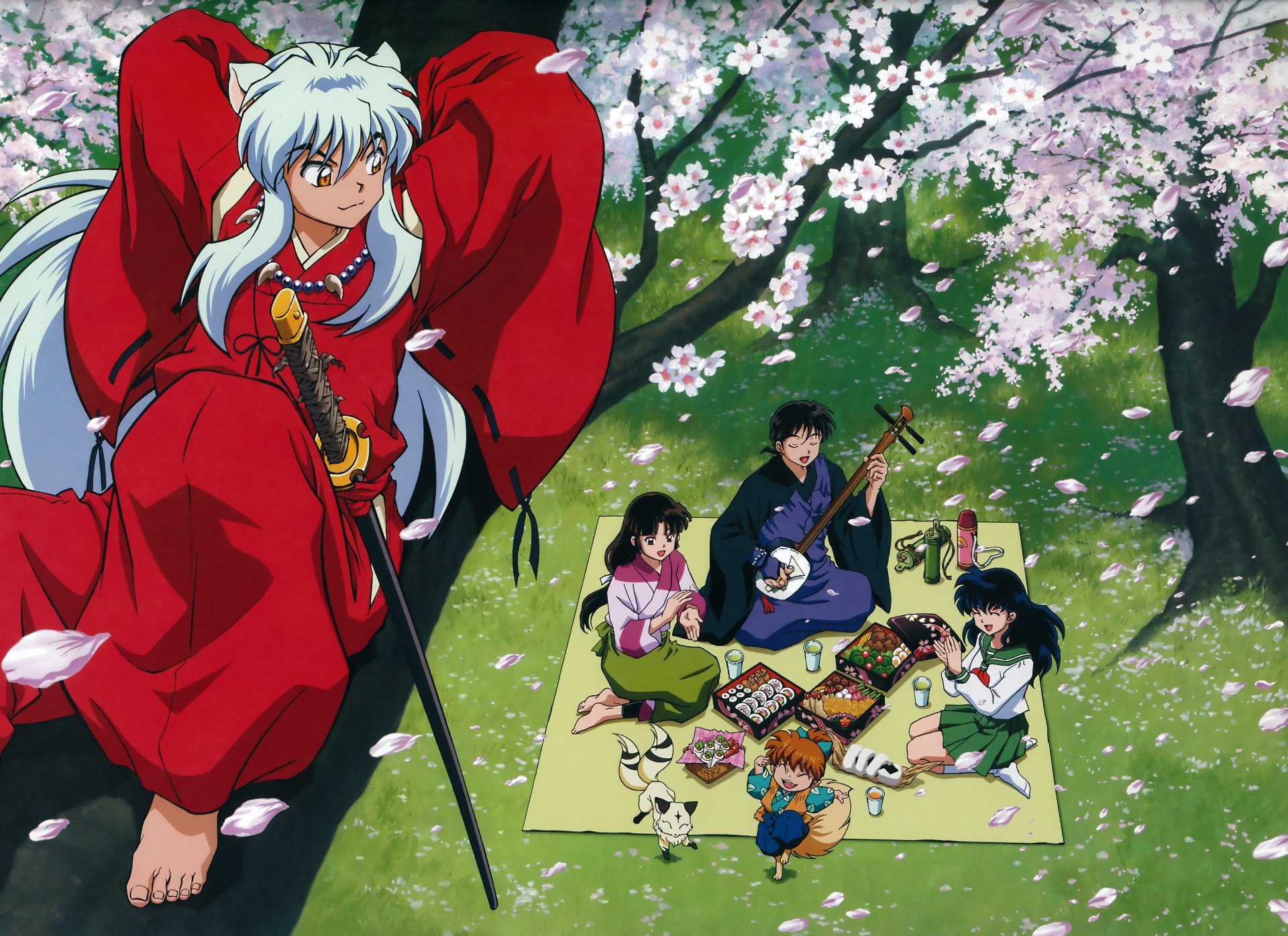 This one is a classic that we all grew up in our lives. What happens when you accidentally fall into a well and get transported to a mystical era in ancient Japan? The young girl Kagome accidentally gets taken into a time traveling well and ends up in this very place. Instead of worrying about boys and school finals, she has to worry about demons. She later becomes friends with a half-demon named Inuyasha who was put to sleep for years. Together, they will learn to work together and stop any evil demons that threatens them. Later in the show, Kagome does go back home to her time, but things get complicated when Inuyasha is able to travel to her place.  Kagome has to deal with her studies and trying to make sure Inuyasha blends in with society. Inuyasha is a beloved fan classic that most people used to watch all the time. The series got some much love and attention, it got a spinoff sequel titled Yashahime. It’s one thing to ditch your time and go dwell in  historic era, but fighting demons sounds scarier than paying bills.

This is the end of my top 4 Isekai post. What are your top 4?